Agreement reached for renewal of Bangladesh safety accord (June 2017) 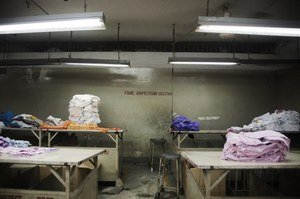 On June 29, the global unions IndustriALL and UNI announced a new agreement with major apparel brands to renew the Bangladesh Accord on Fire and Building Safety for an additional three years.

To date, 13 companies have signed the agreement, including H&M, Inditex (Zara), Primark, and Canada’s Loblaw. Eight more companies are committed to signing, including PVH (Tommy Hilfiger, Calvin Klein) and Esprit, and many more are expected to sign in the coming weeks.

The new three-year Accord, which comes into effect in May 2018 when the current agreement expires, represents an important commitment to build on and improve a ground-breaking independent safety inspection program.

Created after the Rana Plaza building collapse in April 2013, in which over 1,100 workers were killed and over 2,000 injured, the Accord has achieved more than 100,000 safety improvements in more than 1,500 apparel factories, employing more than 2.5 million garment workers.

The Accord is a legally-binding agreement between global and Bangladeshi unions and major apparel brands. It provides transparent public reports on the results of factory inspections and progress on corrective action plans, and health and safety training and an effective complaint process for workers.

MSN is one of the four Witness Signatories to the Accord, together with the Clean Clothes Campaign, the International Labor Rights Forum, and the Worker Rights Consortium.

The media release from the Witness Signatories can be found here.

The full text of the new Accord can be found here.

The statement of the global union federations is available here.