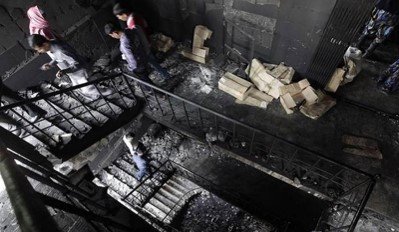 More than three and a half years after 1,134 workers died in the Rana Plaza building collapse, major apparel brands and retailers that are members of the Alliance for Bangladesh Worker Safety, including Walmart, Gap, Target, VF Corporation, and Canada’s Hudson’s Bay Company, are way behind in ensuring that their Bangladesh supplier factories are safe, says a new report from four labour rights organizations.

Co-authored by the Clean Clothes Campaign, International Labour Rights Forum, Worker Rights Consortium, and Maquila Solidarity Network, the report reveals that the Alliance is publishing misleading information that overstates progress being made on factory repairs.

The report shows that factories designated by the Alliance as being “on target” on corrective action continue to have major unresolved building and fire safety issues, including structural problems in multi-story buildings, inadequate emergency exits, and the lack of properly functioning fire alarm systems, all of which put workers at risk.

Despite the lack of information publicly available on the status of corrective action in factories inspected by the Alliance, researchers were able to analyze progress by assessing status reports posted on the website of the Accord on Fire and Building Safety for factories that are under both the Accord and the Alliance.

Unlike the Alliance, the Accord discloses detailed information on the status of corrective action on fire and building safety issues. Accord progress reports reveal that most of the shared factories designated as “on target” by the Alliance are actually “behind schedule”.

Since status reports on factories that are only under the Alliance are not publicly available, the problems identified in our report may be more serious and widespread.

Click here for an article published in the Guardian.