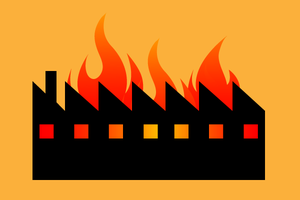 A fire at another Bangladesh factory producing clothes for H&M, JC Penney and other brands has reinforced serious concerns raised by MSN and other witness signatories to the Accord on Fire and Building Safety about long delays in required safety renovations at factories producing for North American and European brands.

The fire broke out at the Matrix Sweaters Factory on February 2 at approximately 7:30 am. While initial reports indicate there were some injuries, there could have been many more injuries and deaths if it had occurred after workers arrived for their shift.

The factory had been inspected initially by the Alliance for Bangladesh Worker Safety almost two years ago and more recently by the Accord. Both found serious fire safety hazards. While Alliance reports claim that the factory is “on track” in implementing its corrective action plan, Accord reports indicate that important renovations needed for workers to safely exit the building have not yet been made.

In a joint statement released on the day of the fire, the Clean Clothes Campaign, International Labor Rights Forum, Worker Rights Consortium, and MSN stated that the incident reinforces the desperate need to speed up factory safety renovations at factories producing for H&M and all other brands sourcing from Bangladesh, including those that are members of the Accord or the Alliance.