Bangladesh Government Attempts to Paralyze Accord and Strip Its Independence 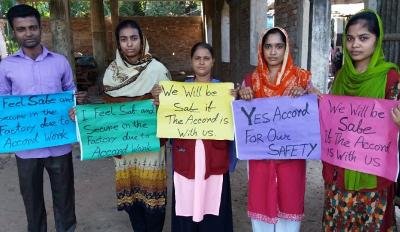 The Bangladesh government is using proceedings before the Supreme Court of Bangladesh to prevent the Accord on Fire and Building Safety from operating, thereby putting workers’ safety at risk.

In its submission to the Court regarding the Accord’s appeal against an order that it cease operating in Bangladesh from 30 November, the government has stated that the Accord should only be allowed to continue operations in Bangladesh under a set of highly obstructive constraints which would strip the globally-respected safety initiative of its ability to operate independently of government and employer control. The constraints include that this would be the last extension allowed to the Accord maintaining its office in Dhaka.

The government’s conditions, if accepted by the Supreme Court, would destroy the independence of the Accord by subjecting all Accord decisions to the approval of a government committee. Another condition would prohibit Accord inspectors from identifying any new safety violations, effectively requiring them to ignore deadly hazards found during their inspections, such as faulty alarm systems, blocked fire exits, and cracks in structural columns. Yet another would prevent the Accord from taking any action against factory owners who threaten or fire workers for raising safety complaints.

At a hearing on 6 December where the Accord’s response to the constraints on its operations was tabled, the government requested another hearing on 10 December to allow time to consider the response. Today, the Government has requested, and been granted, a further delay until 17 December. With no clear direction, the future of the Accord continues to hang in the balance.

The global union signatories to the Accord – IndustriALL and UNI – and the four witness signatories – Clean Clothes Campaign, International Labor Rights Forum, Maquila Solidarity Network, and Worker Rights Consortium – call on Bangladesh’s trading partners and global apparel brands to press the government of Bangladesh to refrain from imposing these shocking impediments to the Accord continuing its life-saving work.

The Accord has been instrumental in radically improving the safety of garment factories in Bangladesh since it was established in the wake of the Rana Plaza factory collapse in 2013 that claimed over a thousand lives. The Accord has identified more than 100,000 fire, building, and electrical hazards and the large majority have been rectified. Over two million workers have participated in safety training in over 1,000 factories.

Despite this progress, dangers remain and workers’ lives are still at risk. Over 50 percent of the factories still lack adequate fire alarm and detection systems and 40 percent are still completing structural renovations.

The Government’s conditions would make it impossible for the Accord to identify and report on any new safety hazards, to support factories towards completing life-saving renovations, to respond to worker complaints about safety hazards, and to continue vital health and safety training for workers and managers. A permission to operate under such conditions is no permission at all.

If the government of Bangladesh imposes these constraints, in order to preserve the standard and independence of its operations, the Accord will have no other choice than to continue to operate from its Amsterdam headquarters, re-locating management of its inspection, remediation and training programs and engaging subcontractors for implementation. This will necessarily have implications for its capacity to support factories in remediation, leading to brands having to terminate their business relationships with more factories that are still not safe.

The Accord has long committed to handing over its functions to a suitable national regulatory body, however the government’s Remediation and Coordination Cell (RCC) is still in an early stage of development. There is broad consensus among stakeholders, including the International Labour Organization (ILO), Bangladesh’s major trading partners, and brands, that the RCC is not yet ready to perform the inspection tasks of the Accord and has no proven record of enforcing safety in the factories under its purview.

The Accord is committed to building up the capacity of the RCC and to cooperation with the government and its inspection bodies to ensure a smooth transition. It has already submitted a plan of how this can be done, but the government has so far failed to comment on it.

A genuine transition plan for factory inspections, safety trainings, and a worker complaint mechanism will need much more time and genuine engagement by the government. It will not be possible unless the Accord is able to continue its operations without restriction. The Accord is a private contract that will remain binding upon the signatory brands until 2021, or until the RCC is demonstrably ready.

The Bangladesh Accord is widely considered by brands, multi-stakeholder initiatives, trade unions, NGOs, investors, government representatives and politicians to be the only credible safeguard for factory safety in Bangladesh. International pressure mounted in the run-up to the court hearing for the Accord to be allowed to continue to operate in Bangladesh until such time as factory safety can be guaranteed by the government.

Bangladesh’s trading partners, including the EU, Canada, and the US, want their brands to be able to rely on the Accord to ensure their supplier factories are safe, a position exemplified by a European Parliament resolution. The three funders of Bangladesh’s RCC - the Netherlands, Canada and the UK - should therefore urge the government of Bangladesh to lift any restrictions, report publicly on the progress of the inspection body, and stress the need for political will in Bangladesh to create a genuine transition plan that must also include safety trainings and a mechanism for worker complaints on safety hazards. If the government of Bangladesh does not allow the Accord to operate effectively and independently, trading partners will have to consider the impact this decision will have on their trade policy with Bangladesh overall. Unless the BGMEA and the Bangladesh government swiftly negotiate with the Accord a feasible way for its full operations to continue, the future prospects for favorable tariff treatment for Bangladeshi exports will be much dimmer.

If it wishes to avoid irreparable damage to Bangladesh’s reputation as an apparel exporter, rather than preventing the Accord from continuing its life-saving work, the government should focus on the development of a competent national regulatory body that can assure the safety of Bangladesh’s garment factories into the future.