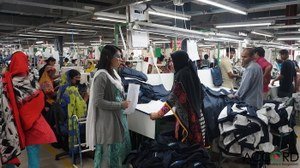 Joint Media Release: Clean Clothes Campaign, International Labor Rights Forum, Maquila Solidarity Network, and Workers Rights Consortium
An independent mechanism allowing garment workers to directly raise safety issues is making factories safer and empowering workers to advocate for their own safety, according to a report published today by the International Labor Rights Forum (ILRF). The success of the complaint mechanism run by the Accord on Fire and Building Safety in Bangladesh – trusted by workers for its independence and its effectiveness – is one more reason why the program should remain in Bangladesh and continue to operate independently until the government and local institutions are ready to take on the task. The next High Court hearing that could determine the future of the Accord is scheduled for this Sunday, May 19.

On May 15, 2013, three weeks after the collapse of the Rana Plaza building in Bangladesh, Bangladeshi unions, global union federations, and apparel companies signed an enforceable agreement that holds the signatory brands accountable for safety in the factories where their garments are made. In addition to its robust and independent inspections program, the Accord provides a credible and effective mechanism for workers to raise complaints confidentially with protection against retaliation.

The Accord was established recognizing that inspections are only part of the solution to improving the safety of garment factories and that workers and their unions are in the best position to conduct day-to-day monitoring and reporting on workplace conditions. The Accord’s complaint mechanism enables workers and their representatives to report concerns about health and safety hazards to an independent institution safely and, if they choose, anonymously.

“The Accord’s complaint mechanism radically reduces the possibility of another Rana Plaza,” says Laura Gutierrez of the Worker Rights Consortium. “The morning of the Rana Plaza collapse, workers who saw cracks in the walls tried to refuse to enter the eight-story building, but were forced to go to their sewing machines under threat of losing their month’s salary. It is clear that the tragedy of Rana Plaza could have been prevented if the workers had had a viable channel to make a complaint or refuse dangerous work.”

The ILRF report finds that the Accord’s complaint mechanism:

These outcomes stand in stark contrast with the still rudimentary system on the website of the government of Bangladesh’s Department of Inspections for Factories and Establishments (DIFE).

“The government’s first attempt at establishing a complaint mechanism does not live up to scrutiny. There is a complaint form and contact information on a website, as well as a mobile app to submit complaints, but these do not allow anonymity. This mechanism reports only 25 received complaints since 2014 of which 13 were resolved, compared to 1,329 complaints received by the Accord during the same time period,” says Christie Miedema of Clean Clothes Campaign. “The Accord has referred many more cases that fell out of its scope to this government institution, which are not reflected on its website and thus appear to have been ignored.”

As the ILRF report shows, in addition to the more widely-publicized inspections program of the Accord, the Accord’s complaint mechanism provides an independent and critical tool for day-to-day monitoring of safety conditions by workers. “Thanks to its strong enforcement mechanism, the Accord is able to successfully provide remedy even in cases where workers were complaining about behavior of management. The inherent power imbalance between workers and their employers is why a genuinely independent mechanism with real sanctioning power that can stand up for workers’ rights is so crucial to meaningfully improve working conditions,” says Lynda Yanz of the Maquila Solidarity Network.

“The success of the complaint mechanism shows that, combined with the training program which educates workers on how to report potential safety violations, it is a necessary, life-saving complement to the Accord’s inspections program and a system to be emulated with the same levels of independence, transparency, and legitimacy in other countries and beyond the field of building safety,” says Elena Arengo of the International Labor Rights Forum.

The Accord’s independent inspections, trainings, and complaint mechanism have brought demonstrable changes to workers in Bangladesh and have increased international confidence in the country’s garment industry. With a new High Court ruling on the future of this program due on May 19, the four witness signatories to the Accord are once more stressing the need to continue the independent work of the Accord until the local regulatory mechanism has proven ready.