Three years after Rana Plaza: What has and hasn’t changed for Bangladeshi garment workers? 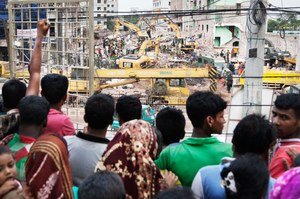 April 24, 2016 was the third anniversary of the Rana Plaza building collapse, in which over 1,100 workers were killed and approximately 2,500 injured in the worst industrial disaster in the history of the garment industry.

Three years later, what has changed for the injured workers and the families of those who died, and for the young women and men who continue to work in the industry?

It took over two years of campaigning to reach the $30 million target in contributions to the Rana Plaza Donors Trust Fund, which has awarded compensation to hundreds of claimants for lost income and medical expenses.

However, the survivors of Rana Plaza have not received compensation for the pain and suffering they had to endure as a result of this preventable tragedy.  In an attempt to correct that situation, two class action suits have been filed, one in Canada against Loblaw (owner of Joe Fresh) and the social auditing organization Bureau Veritas, and one in the US against Walmart, JC Penney, and The Children’s Place.

Possibly the most positive outcome of the Rana Plaza tragedy was the achievement of the Bangladesh Accord on Fire and Building Safety. The Accord is a legally binding agreement signed by Global and Bangladeshi unions and over 200 international clothing brands and retailers.

MSN is one of four NGO witness signatories to the Accord, along with CCC, ILRF and the Worker Rights Consortium (WRC), and is the NGO representative on the Accord’s Worker Participation Working Group.

To date, the Accord’s independent inspection program has carried out over 3,500 fire and building safety inspections in close to 2,000 factories. By April 2016, more than 1,450 corrective action plans have been agreed upon and published on the Accord website.

Despite these impressive achievements, Accord progress reports reveal that the brands and their suppliers have been extremely slow in carrying out the necessary repairs and upgrades to make the factories safe for workers.

In order to prod the brands into action, in September 2015 the four witness signatories published an assessment of the progress of one of the major buyers in Bangladesh, H&M.

Three years after Rana Plaza, much has been accomplished, but much more needs to be done.

For the Global Unions’ statement on what the Accord has accomplished, click here

For reports and updates on H&M’s slow progress in making its supplier factories safe, click here