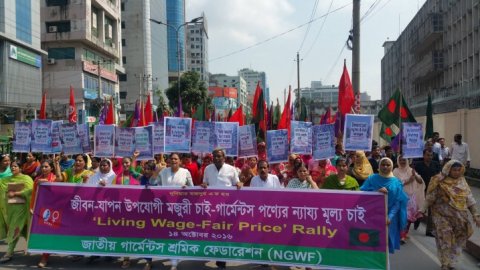 On February 23, Bangladeshi unions affiliated with IndustriALL Bangladesh Council reached an agreement with the Bangladesh Garment Manufacturers and Exporters Association (BGMEA) and the Ministry of Labour for the release on bail of the remaining union leaders still imprisoned for their alleged association with a wage strike in December 2016.

However, the agreement is only a partial victory, since no commitment was made to drop criminal charges against the union leaders and hundreds of workers. It calls for the reinstatement of workers fired for their alleged involvement in the wage strike, but fails to mention back pay. Nor does the agreement include a timeline for the implementation of any of these commitments.

The agreement came two days before the BGMEA’s 2017 Dhaka Apparel Summit. Five major brands – H&M, C&A, Inditex (Zara), NEXT, and Tchibo, as well as the Ethical Trading Initiative, had announced they were withdrawing from the Summit in response to an international campaign for an end to the anti-union repression.

After the agreement was announced, the brands decided to attend the event, but a number of attendees continued to speak out for a withdrawal of the charges and in support of freedom of association.

In a February 24 joint public statement, the Clean Clothes Campaign, International Labor Rights Forum and Worker Rights Consortium call the agreement an important first step, but one that falls short of fully resolving the crisis in Bangladesh.

Click here for the joint statement on the agreement.
Read more