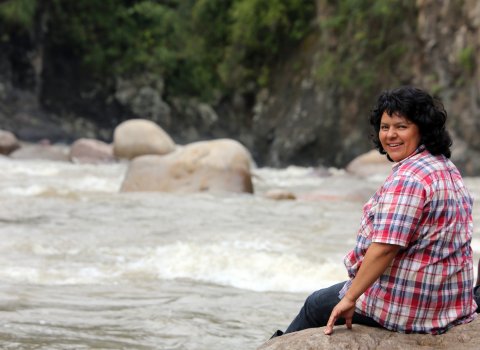 Photo: of Berta beside the Gualcarque River (Goldman Environmental Prize)

MSN joins with a growing number of organizations and institutions throughout the Americas and around the world in condemning the assassination of internationally recognized Honduran human and indigenous rights defender and environmental activist, Berta Cáceres. We express our deeply felt condolences to the members of her family and community and we affirm our support for their continuing struggle.

At 1:00 am on March 3, unknown gunmen broke into her home in La Esperanza and shot and killed her. Prior to her murder, Berta had received numerous death threats, threats of kidnappings and threats against her family, and was subjected to arbitrary arrests, all because of her leadership role in the campaign against a hydroelectric project that threatens her community and the environment. As a result, the Inter-American Commission on Human Rights had granted her precautionary measures for her protection.

Berta was the General Coordinator and co-founder of the National Council of Popular and Indigenous Organizations of Honduras (COPINH), a leader of the Lenca indigenous community’s struggle to protect their land, and an outspoken opponent of the 2009 coup in Honduras and an active participant in the popular resistance to the coup.

In 2015, she was awarded the prestigious Goldman Environmental Prize for her leadership role in the campaign to protect the Gualcarque River and halt the construction of the Agua Zarca hydroelectric dam project, which threatens to cut off the key water source for the Lenca community. The project has been actively supported by Honduran business leaders and the government.

In response to public speculation by Honduran police that the murder might have been part of a robbery attempt, Berta’s mother stated, “I have no doubt that she has been killed because of her struggle, and that soldiers and people from the dam are responsible... I hold the government responsible.”

On March 15, Nelson Noé García Laínez, also with COPINH, was murdered in the community of Río Chiquito. He was returning home from his work supporting families that government security forces had just violently evicted.

Thirty-two Canadian organizations, including MSN, have issued a joint statement calling on the Canadian government to condemn Berta’s murder and on the Honduran government to support an independent, international investigation.

The joint statement also called for migratory restrictions to be lifted from Mexican environmental activist, Gustavo Castro, an eye witness to Berta’s murder and a close colleague and friend. For just under a month, Honduran authorities had prevented Gustavo from leaving Honduras for his home country, despite an existing treaty for mutual cooperation between the two countries that would have permitted his continued participation in the investigation from Mexico. Finally, on March 31, Honduran authorities allowed Gustavo to return home.

Berta’s family, COPINH, and international supporters continue to press Honduran authorities for a full and impartial investigation into the murder of Berta and are requesting that the Inter-American Commission on Human Rights (IACHR) collaborate and provide technical support to that investigation.

Photo credit from home page: COPINH
For more information please click on the links below: