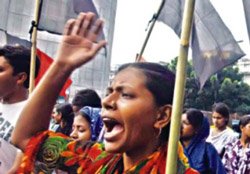 Since December 21, 2016, in the aftermath of a week of unrest by thousands of Bangladeshi garment workers striking for higher wages, the Bangladeshi authorities have arrested or detained at least 14 union leaders and worker rights advocates, and 11 currently remain in police custody.

At least two of the detained labour leaders have reportedly been badly beaten while in custody, and at least one has been threatened with death.

Meanwhile, a worker centre operated by the Bangladesh Centre for Worker Solidarity (BCWS) has been closed down by police. According to Kalpona Akter, Director of the BCWS, the authorities have denied having any knowledge of the police actions, but the police are continuing to prevent the BCWS from re-entering the building.

The Bangladeshi government and garment factory owners appear to be using the wage strike as a pretext to crack down on the labour movement. Employers responded to the strike by temporarily closing 59 factories and by laying charges against hundreds of workers for their alleged participation in the strike. As many as 1,500 workers have since been dismissed. It is feared that they will be blacklisted and will be unable to gain employment in the garment sector in the future.

The striking workers were demanding an increase in the minimum wage to 15,000 BDT (US$190) a month. The current minimum wage of 5,300 BDT (US$67) per month hasn’t been increased since 2013, while the cost of living for workers has increased significantly. Minimum wages have been doubled in Indonesia, Vietnam and Cambodia over that same period,

On December 23, 26 trade union and human and labour rights organizations from around the world sent a joint letter to major apparel brands sourcing apparel products from Bangladesh calling on them to intervene with the Bangladeshi government for an end to arrests and detention of union leaders and worker rights advocates and the release of those currently being detained.

On January 4, 2017, 21 apparel brands responded by sending a joint letter to the Bangladeshi government expressing their concern about the arrest and detention of the union leaders and worker rights advocates.

The Canadian Labour Congress has also written to Canadian Foreign Affairs Minister Stéphane Dion, urging his government to demand that the Government of Bangladesh respect workers’ fundamental rights and freedom of association and ensure the safety and rights of the detained labour leaders.

Click here for a copy of the joint letter from the labour and human rights organizations.