Background: Accord on Fire and Building Safety in Bangladesh 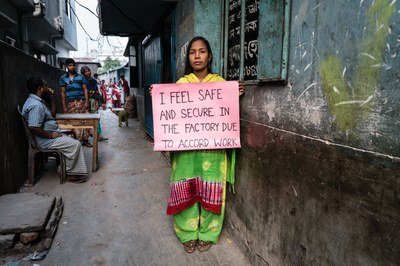 The April 24, 2013 Rana Plaza building collapse in Dhaka, Bangladesh killed 1,134 workers and injured approximately 2,500. The building housed five garment factories. Its collapse has been dubbed the worst industrial disaster in the history of the Bangladesh garment industry. However, this was no accident; workers knew the building was unsafe but had been forced to go to work to meet the order deadlines of international brands.

Rana Plaza was not the first garment factory related tragedy in Bangladesh. Over the past 15 years, hundreds more workers have been killed in preventable factory fires and building collapses, and only within the last five years have there been efforts to compensate workers. Five months before Rana Plaza, 112 workers were killed in the Tazreen factory fire.

The Accord on Fire and Building Safety in Bangladesh (the Accord) was a precedent-setting response to the Rana Plaza tragedy and to ongoing risks to workers’ safety in Bangladeshi ready-made garment factories. It was in place until 2018, when it was replaced by the “Transition Accord.” Established one month after the Rana Plaza collapse, the Accord represented a recognition that the company-controlled factory audit system was failing to detect and eliminate fire and building safety hazards in the country’s garment industry.

The Accord was a legally-binding agreement between Global and Bangladeshi unions and over 200 apparel brands and retailers. It required signatory brands and their Bangladeshi suppliers to cooperate with independent safety inspections, the results of which were published on the Accord website. Signatory companies were also required to underwrite the costs of necessary factory upgrades. Under the Accord, workers and management personnel received health and safety training and their representatives participate in health and safety committees. Workers also have the right to file complaints about unsafe conditions and to refuse unsafe work.

After the five-year Accord expired on May 31, 2018, it was replaced by the “Transition Accord,” which has continued the factory inspection and worker training program for an additional three years.

Through immense international pressure, as of July 5, 2018, over 183 brands and retailers had signed the 2018 Accord, including two Canadian companies, Loblaw and Brüzer Sportsgear which hold licenses to produce clothing for several U.S. and Canadian universities, including York University, the University of Toronto and Memorial University. Both companies were also signatories to the 2013 Accord.

In May 2019, an agreement was reached for the transition of the Accord’s Bangladesh-based functions to a new safety body, the Ready-Made-Garment Sustainability Council (RSC). The witness signatories, including MSN, have since raised serious concerns about the readiness of the RSC to take over those responsibilities. These concerns include the successful continuation of the worker complaint mechanism, the Accord’s commitment to transparency and strong enforcement mechanisms, swift hazard remediation, and the start of a boiler safety program.

In October 2020, amidst the global pandemic, the witness signatories released a public statement warning of problems with the transition of the Accord’s responsibilities to a new local safety inspection body. The statement raises a series of concerns about the readiness and capacity of the Bangladeshi Ready-Made Garment Sustainability Council (RSC) to take over the responsibilities of the ground-breaking Accord and to effectively monitor and improve the safety of Bangladeshi garment factories.

MSN has been a witness signatory to both the original Accord and the 2018 Transition Accord and was a member of the Accord’s Worker Participation Working Group. MSN also played a leading role in convincing Canadian retailer Loblaw to sign the Accord after clothes bearing the company’s Joe Fresh label were found in the rubble of the Rana Plaza building.
Together with the three other witness signatories – Clean Clothes Campaign, International Labor Rights Forum and Worker Rights Consortium – we continue to monitor and assess the transition of the Accord’s in-country functions to the RCC, the compliance of signatory companies with the provisions of the Accord, and the effectiveness of the RCC in carrying out the Accord’s functions.

The Fight for Compensation
Despite the long history of factory disasters in Bangladesh, efforts to compensate surviving workers and family members of the victims are relatively recent.  Years of campaigning resulted in compensation for those affected in two cases.

Rana Plaza Trust Fund
It took two years of campaigning to convince international apparel brands to contribute a total of US$30 million to the Rana Plaza Donors Trust Fund, so that the survivors and families of workers killed could receive compensation for lost income and medical expenses. However, the ILO-administered fund did not provide compensation for the pain and suffering of the families and survivors.

MSN lobbied Loblaw to contribute and increase its contribution to the Trust Fund. We also participated in the international campaign targeting The Children’s Place, Walmart and other companies linked to Rana Plaza.

Tazreen Factory Fire Compensation
More than two years after 112 workers were killed in the 2012 Tazreen factory fire, an agreement was finally reached. International apparel company C&A established a fund with contributions from brands sourcing from the factory, which provided for loss of income payments and long-term medical treatment. The payments were concluded in June 2016, and a medical trust continues to oversee long-term medical treatment for the injured. Unfortunately, given the garment industry’s woefully low minimum wage, calculations of the compensation owed for workplace injuries and life-long wage loss fall short of what survivors need.

On November 24, 2020, at the height of the COVID-19 pandemic and eight years after the factory fire, Tazreen survivors and family members had completed more than two months of continuous protests on the sidewalks outside the country’s Press Club, demanding adequate and dignified compensation.