Brands sourcing from Bangladesh must sign on to the International Accord 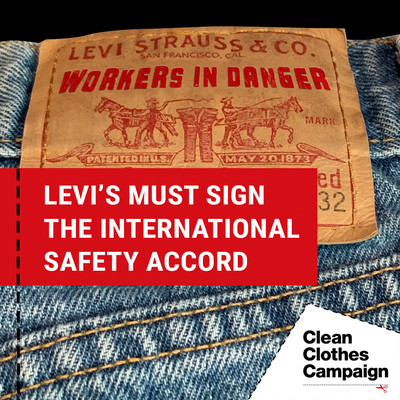 Two months since the launch of the International Accord for Health and Safety in the Textile and Garment Industry, 150 garment and home textile brands have signed on to this life-saving agreement. Several of the most well-known brands in the world, however, have shown no intention of joining this agreement to help keep their workers safe. From this week on, organizations in the Clean Clothes Campaign network, including MSN, commenced a public campaign against the brands that have failed to sign the Accord, starting with Levi’s.

The original Accord on Fire and Building Safety in Bangladesh came about in 2013 in response to the collapse of the Rana Plaza building. This temporary agreement was followed by similar legally binding safety programs in 2018 and 2021. The most recent agreement took effect on 1 September 2021 with a commitment to expanding the enforceable Accord model beyond Bangladesh.

Levi’s, despite sourcing from at least two dozen factories in Bangladesh, has failed to sign the two previous Accord agreements. It is high time that Levi’s starts to take responsibility for the safety of the workers in its supply chain and contribute financially to making factories safer. Many of the factories that Levi’s currently sources from are not covered by any transparent efforts to detect and fix safety hazards. In many other factories Levi’s is free-riding on the efforts of Accord signatories such as Uniqlo, Next, Varner, G-Star, and Sainsbury’s, who through their signature on the Accord committed to ensuring that safety renovations are financially possible in the factories they source from.

The campaign against Levi’s is just the start of a long-term campaign by the Clean Clothes Campaign network to push brands sourcing from Bangladesh to sign the Accord. The campaign will continue to target both brands that have signed previous agreements but have yet to sign the most recent Accord and brands that have not signed previous agreements, relying on their own accountability systems, corporate social auditing or unenforceable collective systems such as Nirapon.

Kalpona Akter, president of the Bangladesh Garment and Industrial Workers Federation (BGIWF) and founder of the Bangladesh Centre for Worker Solidarity (BCWS), said: "We urge all brands that source from Bangladesh to take responsibility for the safety of their workers by signing the International Accord. There are too many brands out there that keep on hiding behind their own corporate programs without independent oversight, or behind non-transparent industry programs like Nirapon that are not trusted by the workers. Brands’ self-regulation has never saved our workers’ lives. The Accord is the highest standard the garment industry has, and any brand that produces in Bangladesh and fails to sign it, is basically saying they don't care about their workers' safety."

Getting more signatures on the new Accord is urgent, in part because of the commitment to expand to at least one other country.  Countries like Pakistan are in dire need of a credible and effective safety program. Muhammad Bux, a garment worker from Karachi, Pakistan, said: "The health and safety situation [in my factory] is not good. God forbid, if there is a fire or any other emergency, workers may get trapped. I have not noticed any measures taken by factory management during the last five years to improve the safety of workers."