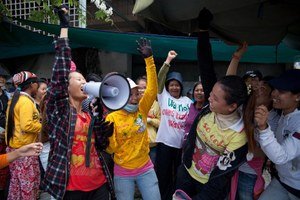 Despite strong opposition from national unions and international labour rights organizations, on April 4 the Cambodian parliament approved a controversial new trade union law that greatly restricts workers’ right to freedom of association and collective bargaining and the right to strike.

The Trade Union Law will make registration of a union federation more difficult, allow an entire union to be dissolved if any union official committed an illegal act, and impose high financial penalties against a union found to have violated the Law.

On the day of the vote, the International Labour Organization (ILO) released a public statement raising concerns about some of the Law’s provisions and omissions, including “insufficient protection of the right of all workers and employers to freely set up organizations of their own choosing, and of the right of these organizations to decide on their internal matters without interference.”

In March, MSN had joined with more than 40 other labour rights and trade union organizations in calling on major apparel brands sourcing products from Cambodia to publicly declare their support for a Trade Union Law that guarantees the rights of the garment workers to freedom of association.

Some brands, including H&M and Tchibo, responded positively by making public statements in support of such a law.

The joint letter is available on the Clean Clothes Campaign website.