CCC calls for binding agreements for a living wage (October 2015) 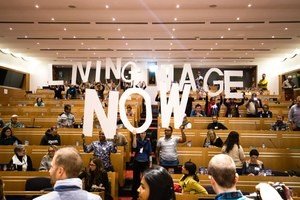 On October 13, the Clean Clothes Campaign (CCC) called on over 250 delegates to an international Living Wage Forum in Brussels to campaign for binding agreements and legislation to guarantee corporate accountability and a living wage for garment workers.

The CCC delivered petitions with over 125,000 signatures in favour of a living wage to representatives of international brands and the European Commission attending the forum.

Speakers at the forum agreed that voluntary codes of conduct and pilot projects of brands and retailers have made little or no difference in workers’ lives.

The CCC believes that structural change and binding agreements are needed to guarantee a living wage and other worker rights. They point to the Bangladesh Accord on Fire and Building Safety and the Freedom of Association Protocol in Indonesia as two ground-breaking agreements that address root causes of unsafe factories and the lack of freedom of association.

They argue that a similar approach is needed to tackle the systemic problem of poverty wages in the global garment industry.

The CCC is also calling on the European Union Commission to quickly improve legislation on transparency for the garment sector, including introducing legal requirements for disclosure of supplier factory locations, a demand MSN and our coalition partners have been supporting in Canada for a number of years.

The extremely low wages in the garment sector in Eastern Europe were also a subject of discussion at the forum. For example, garment workers in Georgia take home a mere 114 euros per month, just 10% of a living wage in that country.

The Asia Floor Wage Alliance, which also participated in the forum, believes that brands should partly fund wage increases needed to achieve a living wage in both Eastern Europe and Asia, since it is they who make most of the profits from the products made by the women and men working in the garment factories and the rest of the garment supply chain.

MSN participated in the CCC forum and chaired the workshop on the struggle for a living wage in Haiti and Central America, where Segio Chavez of the Labour Research Team of El Salvador discussed the findings of a wage research study in Central America co-authored by four national research teams and MSN. Yannick Etienne of Ouvriye in Haiti discussed the struggle for a living wage in her country.

For more information on the Forum, visit the CCC website