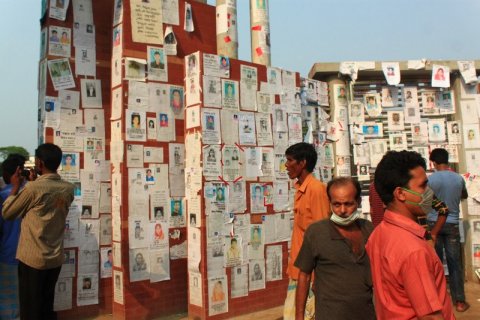 April 24 marks the eighth anniversary of the Rana Plaza disaster in which 1,134 workers were killed and 2,500 injured when a garment factory building collapsed. Today MSN is joining with Bangladeshi, international and Canadian allies in calling for a renewed commitment to worker safety in Bangladesh and other garment-producing countries.

The Rana Plaza tragedy signaled the urgent need for the creation of the Bangladesh Accord on Fire and Building Safety, a legally binding agreement between trade union organizations and over 200 retailers and brands whose products are made in the country. MSN is one of four NGO witness signatories to the Accord.

The ground-breaking work of the Accord’s independent factory inspection program, worker complaint mechanism, and health and safety training for workers has resulted in significant improvements in workplace safety for over 2 million workers in one of the major garment-producing countries in the world. The legally-binding nature of the Accord has become a model for future mandatory human rights due diligence initiatives that go far beyond voluntary, private sector self-regulation.

Unfortunately, the future of the Accord is now in doubt. Its program in Bangladesh has been transferred to the Ready-Made Garments Sustainability Council (RSC). Unlike the Accord, whose governance structure is comprised of an equal number of worker and company representatives, the RSC is governed by a board of directors that is made up predominantly of brand representatives and factory owners, with union representatives making up only a third of its members. Unless companies are convinced to sign a new international Accord for Bangladesh, which could be extended to other countries, they will no longer be legally accountable for unsafe practices in their supplier factories after the Transition Accord expires at the end of May 2021.

Rana Plaza Never Again, Together We Remember
Join with MSN, Bangladeshi unions. and other members of the global Clean Clothes Campaign (CCC) network in commemorating those who died and were injured in the Rana Plaza tragedy, and in calling on apparel brands and retailers to sign a new legally binding agreement to preserve the accomplishments of the Accord in Bangladesh, and to extend this highly successful program to other garment-producing countries.

The anniversary statement also joins the Clean Clothes Campaign global network in calling on all apparel brands to ensure workers in their supplier factories receive their full wages and benefits throughout the pandemic and to sign on to a new legally-binding severance guarantee fund. This fund would protect workers who lose their jobs as a result of factory closures by ensuring they receive their full legal severance pay. The statement concludes by calling on the Canadian government to legislate companies to respect human rights in their global operations and supply chains

Area(s) of Work:
COVID-19 | Defending Workers’ Rights and Livelihoods in the Time of the Pandemic
Bangladesh Fire and Building Safety and Workers' Rights