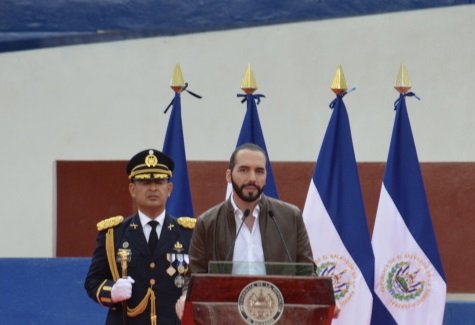 Human rights advocates are sounding the alarm on a proposed “Foreign Agents Law” in El Salvador that would severely limit the work of independent civil society organizations and media outlets. Due to international pressure, the Legislative Assembly has placed the approval of the law on hold for now in an attempt to reach a consensus with the international community. Nevertheless, considerable concern remains about future drafts of the bill.

As originally written, the law would require individuals and entities that receive funding from abroad to register as “foreign agents.” As registered foreign agents, they would be prohibited from participating in “political activities” perceived to threaten public order or national security and stability. Those who failed to comply could face fines, jail time, and/or the cancellation of their organization’s legal status.

While President Nayib Bukele cites the need for transparency as the purpose behind the proposed law, national and international organizations have denounced the bill. A communiqué released by 21 Salvadoran human rights, environmental, and youth organizations expresses concern that the implementation of such a law would lead to violations of freedom of association and freedom of expression. A wide range of organizations in El Salvador have criticized the law as an attempt to intimidate and silence critics of the current administration, asserting that organizations are already transparent, submitting regular reports to the government about their finances and work.

The bill also includes a proposed 40% tax on funds from foreign sources, thereby discouraging international funding for social programs and making it virtually impossible for many organizations to carry out their important work.

While the bill includes exemptions for remittances, commercial businesses, humanitarian aid, development projects, and academic and religious activities, among others, it gives the president broad power over its implementation. Organizations like the Due Process of Law Foundation and Human Rights Watch argue that the overly broad provisions in the bill create confusion and, in some cases, contravene international human rights law.

The Inter-American Commission on Human Rights and international organizations have urged the Legislative Assembly not to pass the law, citing concern about the ways in which it could be used to limit the work of independent civil society and media organizations, and the serious impacts its implementation would have on organizations’ capacity to defend human rights and freedom of the press.

During initial announcements about the proposed law, members of the current administration mentioned specific organizations, such as human rights organization Cristosal and independent digital media outlet El Faro – a persistent critic of the Bukele administration and former administrations – as among those the law could target.

President Bukele’s efforts to place limits on the work of organizations and the press with legislation is just one example of a concerning trend in the region. In February 2020, Guatemala passed a law to monitor NGOs more closely, giving the Minister of the Interior broad powers to close organizations that fail to comply with regulations. Nicaragua passed a similar law on foreign agents in October of that same year and has since cancelled the legal status of at least 45 NGOs, including Oxfam, leading several others to leave the country.

The proposed law in El Salvador comes amidst a wave of increased pressure on NGOs in the country. On November 22, Salvadoran prosecutors raided the offices of seven NGOs as part of an investigation into the alleged misuse of state funding. The organizations work on issues related to education, development, and human rights. One of the organizations, the Mélida Anaya Montes Movement Association (Las Mélidas), a feminist organization, denounced the raids as an abuse of power.

MSN is deeply concerned about the negative impact El Salvador’s “foreign agents” law could have on the labour, women’s, and human rights organizations we work with that receive international funding for their crucial work advocating for workers’ rights in the country.