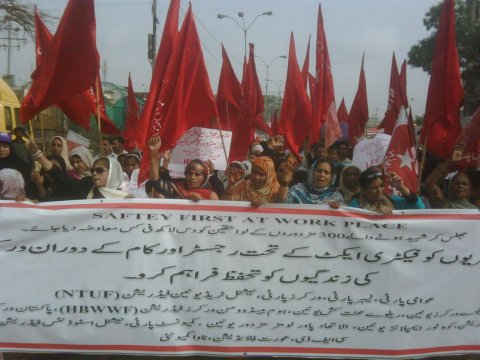 On the ninth anniversary of the Ali Enterprises factory fire in Karachi, labour leaders in Pakistan call upon apparel and textile brands to ensure that factories in their country are made safe. With the start of the International Accord for Health and Safety in the Garment and Textile Industry last week, there is now a concrete avenue to address factory safety in the country. Labour leaders stress the urgency of swiftly expanding the Accord program to Pakistan.

Saturday, September 11th, marks nine years since a horrific fire in the Ali Enterprises factory killed more than 250 workers only three weeks after being certified as safe by a commercial social auditing firm. This was the deadliest factory fire in the history of the global garment industry. Research shows that simple safety measures would have been enough to ensure that the workers could have exited the factory safely that day, but instead they were trapped behind barred windows and blocked exits.

Soon after Rana Plaza came crashing down seven months later, a binding safety agreement between apparel brands and unions, the Accord on Fire and Building Safety in Bangladesh, was established; in contrast, in Pakistan virtually nothing has happened to make factories safer.

Nasir Mansoor, president of the National Trade Union Federation in Pakistan, said: “We keep on hearing about factory fires on a regular basis. Nine years after the tragedy at Ali Enterprises, nothing has been done to systematically ensure factories in Pakistan become safer. This means that the workers who sew products for companies like Ikea, Gap, and Asda are still risking getting trapped in a factory during a fire every day, just by going to work."

Saeeda Khatoon, chair of the Ali Enterprises Fire Affectees Association, lost her son in the fire: "In the past nine years many parents lost their children and children have lost their parents. We have not forgotten our children. We are fighting for the other children who are working in unsafe factories. This is our struggle. I don't want any mother to suffer what I have had to go through."

“There is no attention to the health and safety of workers. There are fire alarms but these are just showpieces and do not work. We have never been told about emergency exits or safety measures in case of a fire or other accidents. Often we hear about accidents and deaths of workers in other factories and get afraid that if the same thing would happen to our factory then what will happen?”, said Mukhtar Ahmed, a garment factory worker in the Korangi area in Pakistan.

Last month, apparel brands and unions that have been cooperating in the Bangladesh Accord for the past eight years announced the launch of the International Accord for Health and Safety in the Garment and Textile Industry, a successor agreement to the Bangladesh Accord, which will expand the work to at least one other country. Unions and labour rights organisations in Pakistan have been calling for the Accord to take up work in Pakistan since 2018 and now renew their call.

"Since the tragic Ali Enterprises fire, in which more than 250 workers died, the trade unions and labour rights organisations in Pakistan have been struggling to convince our governments, buyers and international brands to take concrete measures for the safety of garment and textile workers. We have been working together for five years now to work towards a legally binding agreement with international brands similar to the Bangladesh Accord. Now, after the signing of the new International Accord for Health and Safety in the Garment and Textile Industry and its emphasis in expanding the Accord to other countries, Pakistan is well placed to be the next country to welcome the Accord. Trade unions and labour rights organisations are ready to communicate their willingness to work together with all stakeholders for expanding the Accord to Pakistan," said Khalid Mahmood, Director of the Labour Education Foundation in Pakistan.

Karamat Ali, Executive Director of the Pakistan Institute of Labour Education & Research, said: “Unions and worker rights organisations reached consensus over the past years on what a Pakistan Accord should look like. We have talked to many stakeholders and believe that Pakistan is ready to be the first country the Accord expands to: the urgency and willingness are high.”

A timeline published today (see link below) by the witness signatories to the Bangladesh Accord – Clean Clothes Campaign, Global Labor Justice - International Labor Rights Forum, Maquila Solidarity Network, and Worker Rights Consortium – shows a snapshot of the many fatal and near-fatal incidents in garment and textile factories outside of Bangladesh since the beginning of 2021, showcasing why the International Accord needs to urgently expand to Pakistan and other high-risk countries.