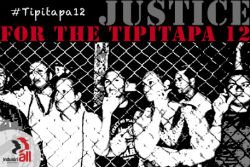 Twelve workers will have to serve time more time under house arrest for taking part in a peaceful protest against the dismissal of their union representatives and unjust working conditions.

The protest took place in June of this year outside the Korean-owned SAE-A Tecnotex garment factory, in an export processing zone - Zona Franca Senika - in Tipitapa, near the capital Managua.

Union leaders at the factory raised concerns about animal hairs found in the drinking water, and about unrealistic production targets. They were fired for speaking out.

Three thousand workers downed tools to support their union leaders, and protested outside the factory. They were joined by family members, workers from other factories, and passersby. Riot police arrived to suppress the protest, and arrested 13 people, including a minor and two taxi drivers who had nothing to do with the protest.

The minor was released, but twelve people were charged by the state prosecutor with obstructing the police, including three trade unionists, six workers from neighbouring factories, the two taxi drivers, and the mother of one of the trade unionists.

On November 23, they were found guilty of criminal obstruction, and on December 16, ten of the twelve were sentenced to one year detention, and the remaining two to three years. However, the workers do not have to serve jail time as they are under house arrest, with the obligation to appear before court every 15 days.

MSN is working with the Maria Elena Cuadra Women’s Movement, FESITEX textile workers union, the Clean Clothes Campaign, and IndustriALL Global Union on an international campaign to Free the Tipitapa 12.

Please join us in demanding that all charges be dropped and the workers and others arrested be released and allowed to return to work.

The current Nicaraguan government, led by President Daniel Ortega, was elected on the strength of the Sandinista party’s legacy of supporting democratic rights, including the rights of workers and their right to protest unjust treatment. The use of riot police to suppress a peaceful worker protest and the criminalization of labour protest that the prosecution of the Tipitapa 12 represents sets a dangerous precedent for a government that should be defending workers’ rights.

Nicaragua recently signed a trade deal with Korea, a country notorious for repressing union rights. On December 12, the leader of the Korean Confederation of Trade Unions, Han Sang-gyun, was sentenced to three years in prison. There are concerns that the Tipitapa 12 are being used to send a signal to Korea that labour protests will not be tolerated in Nicaragua’s export processing zones.

SAE-A Tecnotex is a multinational apparel producer, with 41 factories in Guatemala, Nicaragua, Costa Rica, Haiti, Indonesia, Vietnam, Myanmar, and Cambodia. The factory in Nicaragua employs 3,000 people, and makes clothes for the US market. The biggest client is JC Penney, but the company also produces for other brands, including Kohl’s, Target and Walmart.