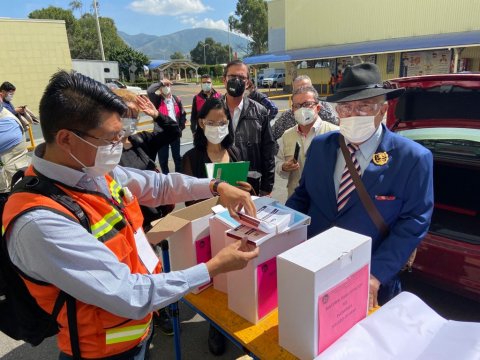 In a precedent-setting test of Mexico’s labour justice reform, workers at the General Motors (GM) truck assembly plant in Silao, Guanajuato have voted to reject a protection contract between their employer and the Miguel Trujillo López union, an affiliate of the Confederation of Mexican Workers (CTM).

This second vote held on the existing collective bargaining agreement (CBA) took place over a two-day period on August 17 and 18 with observers present from the Ministry of Labour (STPS), the National Electoral Institute (INE), and the International Labour Organization (ILO).

Under Mexico’s May 1, 2019 reformed Federal Labour Law, all existing CBAs must be subjected to a “legitimation vote” by May 1, 2023. The requirement is intended to eliminate “protection contacts” signed by employers and unrepresentative unions without workers knowledge or consent.

Of the 5,876 workers who voted, 3,214 voted to reject the existing CBA and 2,623 voted in favour. As a result, the CBA is nullified, but the workers will retain the benefits in the contract.

The CTM union was forced to hold a second vote after the Ministry of Labour suspended the initial vote in April of this year when serious violations were uncovered, including the destruction of ballots and the counting of results halfway through the voting process.

Workers had also filed complaints with STPS alleging that they had been required to attend captive audience meetings, where management and CTM representatives told them they would lose all their benefits if they voted against the existing CBA and that the factory would be shut down and production shifted elsewhere.

After the April vote, an audio recording was released to the media confirming that workers had in fact been threatened that they would lose their jobs if they voted “NO”.

Throughout this difficult struggle, a movement of former and current workers campaigned in favour of a “No” vote. The workers were also supported by a coalition of independent auto worker unions in Mexico and trade unions in the US and Canada.

The violations of the GM workers’ rights under Mexico’s Federal Law and the labour chapter of the Canada-US-Mexico trade agreement (CUSMA) became the subject of the first complaint lodged by the US government under the agreement’s rapid response mechanism.

On July 7, the governments of Mexico and the US reached agreement on a remediation plan to address the denial of workers’ rights at the GM plant. Key points of agreement included:

The conditions outlined in the agreement helped to ensure that the CBA legitimation vote at the GM Silao factory was free and fair. With the termination of the protection contract, the workers now have the option to form or join another union and negotiate an improved CBA, although the incumbent CTM union could also seek to represent the workers and negotiate a new CBA, if it could prove it has the support of at least 30% of the workforce.