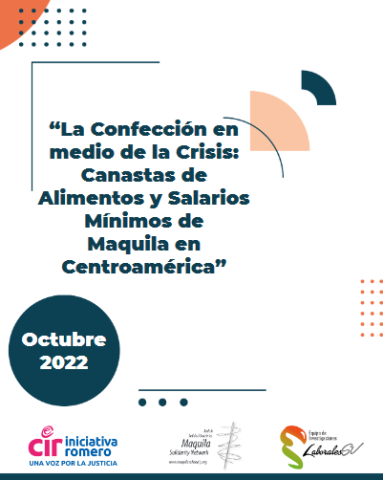 The latest in a series of annual wage reports by the El Salvador-based Labour Research Team (Equipo de Investigaciones Laborales - EIL) highlights the growing gap between the cost of basic food items and monthly minimum wages for workers in Central America’s four garment-producing countries - Guatemala, El Salvador, Honduras and Nicaragua. In a year marked by rising inflation and food costs, factory closures and mass layoffs, the report raises serious concerns about how workers will meet their basic needs.

The just-released report, La confección en medio de la crisis: canastas de alimentos y salarios mínimos de maquila en Centroamérica, confirms that the minimum wages for garment workers in the region continue to fall below the poverty line. Even in Honduras and Nicaragua, the two countries in the region with the highest levels of unionization in the sector, and where unions participate in bipartite and tripartite minimum wage negotiations, workers’ wages do not begin to meet their basic needs.

This is particularly concerning in Guatemala, where minimum wage increases between 2021 and 2022 were negligible, and in El Salvador where the minimum wage did not increase while the cost of food increased by 14.46% between June 2021 and June 2022. This reduction in real wages poses a major barrier to workers’ ability to provide themselves and their families the most basic food items, and certainly dampens hopes of achieving a living wage in the near future.

The report also highlights the importance of the garment and textile industries for the region’s national economies and workers’ employment. According to the report, over 9% of total garment imports to the US come from Central America, with Honduras and Nicaragua making the top 10 list of countries producing apparel for the US market, the latter replacing El Salvador from the previous year.