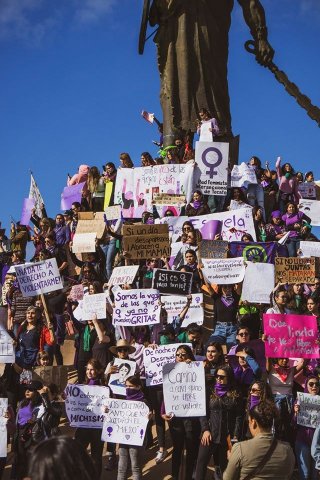 On Sunday, March 8th, women around the world took to the streets to celebrate International Women’s Day (IWD) and demand the end of gender-based violence and discrimination. Throughout Latin America, women’s movements organized massive protests on March 8 and one-day strikes on Monday, March 9.

In Mexico City alone, some 80,000 women marched into the Zócalo on March 8, in a steady stream that lasted hours, to demand justice, equality and an end to gender-based violence. Massive rallies were also held in other Mexican cities. The next day, millions of women across Mexico took part in a one-day strike entitled “A Day without Women.”

The strike was organized to protest gender-based violence, the growing femicide crisis in Mexico, and the lack of government action to address the crisis. The country is witnessing an average of 10 women killed a day, and 2019 saw the biggest recorded number of femicides, with 3,142 women killed.

The number of Mexican women from all sectors of society participating in the strike exceeded expectations. The public transit system in Mexico City saw a decline in ridership of 40% in the subway and 20% in the bus system. Over 50% of the branches of the two major banks remained closed due to the strike, and over 21,000 schools closed. Schools, universities (including Mexico’s largest, UNAM) and public institutions closed-down in support of the strike. The absence of women working in restaurants and retail stores was noticeable.

According to local labour rights organizations that MSN works with in Aguascalientes, Puebla, Guadalajara and Morelos, many women maquila workers participated in the strike, despite the refusal of most employers to grant them permission to take the day off. Some companies reportedly allowed women workers to participate, some with the condition that the time off work would be discounted from their annual paid vacation period, or made up at a later date. A smaller number promised not to deduct a day’s pay for those who participated.

Despite the massive participation in the “Day Without Women,” Mexico’s president, López Obrador, continues to deny that his government needs to adopt new strategies and actions to combat the alarming increase in violence against women in his country.

On March 8 and 9, another 21 women were murdered in Mexico.