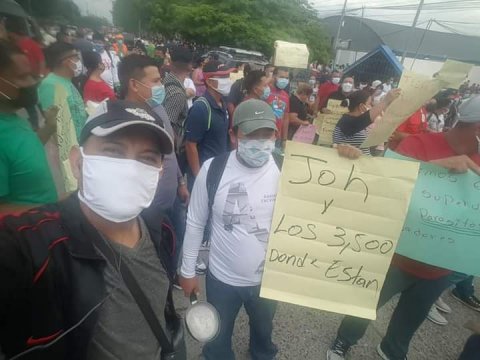 The twelve-page report provides an analysis of the economic implications of the current minimum wages in each country on workers’ ability to afford basic food items, arguing that the pandemic has exasperated the already poverty level wages of garment workers. For Nicaragua and Honduras, the two countries with functioning tri-partite minimum wage agreements, and the hardest hit in the region by two hurricanes in the November 2020, the situation is dire.

As the report shows, while the region has suffered major reductions in the value of exports to the US market, overall, most countries in the region moved up in their  international ranking for exports to the US, indicating the global impact that the pandemic has had on the industry as a whole.

The 2020 report builds on the EIL’s previous wage reports. The 2019 report provided brief analyses of the political and economic context within which the tripartite minimum wage negotiations took place in each country, highlighting the actions of a variety of actors including government, industry, women’s organizations and trade unions.

The 2018 report, co-authored with MSN, highlighted the enormous gap between the minimum wages for Central American workers and the cost of living for those workers – a situation that has not changed in 2020, except in El Salvador. The MSN section of the report described worker struggles for increases in the minimum wage in Asian countries and international campaigns and initiatives for living wages for garment workers.