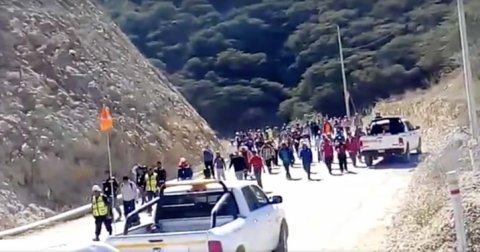 The assassination of two brothers, Victor and Marcelino Shaunitla Peña, has shone a spotlight on Mexico’s corrupt and anti-democratic labour relations system. The brothers were participating in a work stoppage by mineworkers with the support of community members against the Canadian-owned Media Luna gold mine in Azcala, Guerrero. The murders happened just as NAFTA negotiations were resuming in Mexico City.

The brothers were shot dead on November 18 by a group that, according to reports from the site of the crime, included local leaders of the Confederation of Mexican Workers (CTM), which is affiliated with the ruling Institutional Revolutionary Party (PRI). Workers who were present at the time of the murders claim that those responsible were arrested, but later released.

The Media Luna workers are fighting for the right to be represented by an independent union, the Mexican National Union of Mine, Metal and Allied Workers (SNTMMSRM, or “Los Mineros”), rather than the CTM union, which they say was imposed on them by their employer without their knowledge or consent. A vice-president of the company, Gabriela Sánchez, confirmed in an article in Canada’s Globe and Mail that her company “engaged” the CTM before they had hired any workers.

The CTM and other “official unions” are notorious for signing employer protection contracts, fraudulent collective bargaining agreements that are often signed before any worker has been hired and seldom provide more benefits than the minimum required by law. The signing of protection contracts is a widespread employer tactic to keep out independent, democratic unions, which has been condemned by the International Trade Union Confederation and found to violate workers' fundamental right to freedom of association by the International Labour Organization.

Toronto-based Torex Gold Resources, which owns the Media Luna mine, and Guerrero state authorities claim there is no connection between the murders and the labour dispute that was triggered by workers’ desire to join the union of their choice, and that the Shaunitla Peña brothers were not employed by the company. However, numerous media reports suggest they were either hired to do construction work for the mine or were employed through an outsourcing company contracted by Torex Gold. Outsourcing is an increasingly common practice in Mexico, which labour relations experts say companies resort to in order to avoid their legal responsibilities to workers as an employer.

Local residents have also joined the worker protests because of the company’s failure to compensate their community for water being used by the mine.

In a November 19 media release, Los Mineros stated that they hold the company, the CTM and Mexican president Enrique Peña Nieto and his government responsible for the attack on the striking workers and community members.

Both the United Steelworkers (USW) and Canada’s largest private sector union, Unifor, are calling on the Canadian government to intervene with the Mexican authorities and the company to recognize the Media Luna workers’ right to be represented by the union of their free choice and to prevent further violence.

The violence and repression at Media Luna reinforces the need for increased pressure on the Mexican government to make good on its commitment to introduce fundamental reforms to the country’s labour justice system to guarantee the right of workers to democratically select their union and vote on any collective bargaining agreement before it is registered.

“The conflict at Media Luna underscores the need for enforceable labour rights protections that must be implemented prior to the launch of a new NAFTA,” say the Canadian and US leaders of USW. “Workers’ rights must be included in the body of any new trade deal… Unifor will never support a NAFTA agreement without labour reform in Mexico,” says Unifor president Jerry Dias.