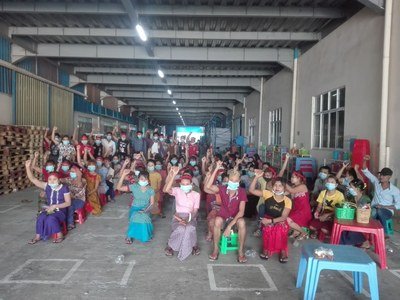 In a tremendous precedent-setting victory, the union at the Rui-Ning factory in Myanmar has signed an agreement with factory management and the global brand Inditex (Zara) to reinstate the union president and, once the factory resumes hiring, other dismissed union members. This win follows a three and a half months long struggle sparked in early April by the dismissal of 324 workers, of which 298 were union members.

In the wake of the COVID-19 pandemic, garment workers around the world are not only struggling to survive the risk of infection, loss of employment and cuts in their wages, they are also resisting employer attempts to use the pandemic as an opportunity to rid themselves of unions and union members. Combining local campaigning and pressure from International labour rights organizations, workers in Myanmar are winning the reinstatement of fired union members and respect for their union rights.

In another successful fight against union busting, workers at the Huabo Times factory in Myanmar won a signed agreement with factory management to reinstate 26 union members who had been dismissed. The union members, including four union leaders, and 81 union supporters, were dismissed within days after the union had officially registered in May.