Pressure mounts for end to anti-union repression in Bangladesh 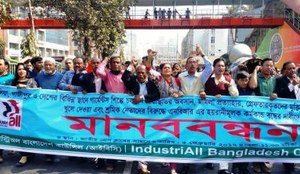 International pressure is mounting on the Bangladesh government, international apparel brands and Bangladeshi factory owners to end a crackdown on workers’ rights in response to a December 2016 strike for an increased minimum wage.

On the week of February 13, solidarity protests led by the Global Unions IndustriALL and UNI and national union organizations were held at Bangladeshi embassies in Canada, the United States, Europe and Australia, demanding an end to the repression, the dismissal of all unsubstantiated cases against recently arrested union leaders and garment workers along with their immediate release from detention.

A February 15 report by Human Rights Watch documented numerous abuses by Bangladeshi authorities and factory owners against workers and union leaders for their alleged involvement in the wage strike. These include the arrest and detention of at least 34 union leaders and worker rights advocates and one journalist based on vague allegations or laws that have been repealed, threats by police to kill two detainees, the closure of union offices by police, the filing of complaints by employers against over 1,600 “unknown persons”, and the dismissal or suspension of an estimated 1,500 workers.

In a February 22 media release, the Clean Clothes Campaign (CCC) and International Labor Rights Forum (ILRF) announced that because of the continuing repression, five major apparel brands – H&M, Inditex (Zara), C&A, NEXT and Tchibo – and the UK’s Ethical Trading Initiative have pulled out of the February 25 Dhaka Apparel Summit, which will be hosted by the Bangladesh Garment Manufacturers and Exporters Association (BGMEA). The only labour representative scheduled to speak at the Summit has also pulled out.

“Targeting labor activists and intimidating workers instead of addressing their wage grievances tarnishes Bangladesh’s reputation and makes a mockery of government and industry claims that they are committed to protecting worker’s rights,” says Phil Robertson of Human Rights Watch. “Global brands sourcing from Bangladesh and aid donors should press the government to stop persecuting workers and labour rights activists.”