Questions raised about agreement on Bangladesh Accord 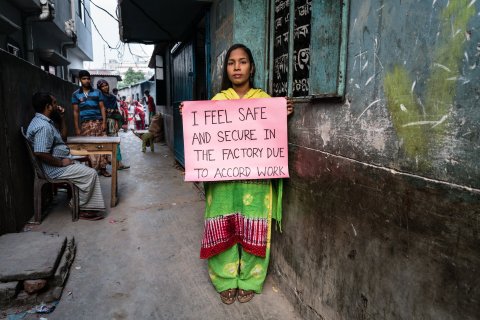 On May 19, 2019, the Appellate Court of the Bangladesh High Court accepted a Memorandum of Understanding (MoU) reached earlier this month between the Bangladesh Accord Steering Committee and the Bangladesh employers’ association in the ready-made garment sector, BGMEA. The MoU stipulates that the Accord will continue to operate in Bangladesh for a transition period of 281 working days, during which time brands, unions and the BGMEA will establish a new institution called the RMG Sustainability Council (RSC), which will take over the Accord’s tasks in 2020.

This memorandum concludes a period of uncertainty about the Accord’s future in the country and assures its operation for one more year; however, it does not take away the feeling of uncertainty entirely, by remaining ambiguous about the immediate impact on the workings of the Accord. It also raises questions on vital elements of the follow-up institution foreseen in the agreement.

Media and worker representatives in Bangladesh have already posed the question of whether this memorandum will weaken the Accord’s independence and give more power to factory owners. “This deal is sure to compromise the safety and security of garment workers given there will be no independent decision-making by the Accord,” Bangladeshi union leader Babul Akhter predicted to Reuters. “This was framed without any discussion with labour unions.”

The memorandum’s immediate impact
The agreed presence of a “BGMEA unit” within the Accord office, and the exact function of this unit, are sources of concern. According to the MoU, factories’ Corrective Action Plans will be evaluated in collaboration with this unit. This raises questions about employers’ influence over the independent decision-making processes of Accord staff. Furthermore, a visible employers’ presence inside the Accord office might negatively impact the willingness of workers to rely on its complaint mechanism, one of the most important features of the Accord.

Fears exist that the BGMEA, which has frequently and publicly rejected the Accord’s work as interference into its affairs, will try to use this unit to exert undue influence on the Accord’s independent functioning against the intent of the MoU. These fears were reinforced by a recent press statement from the BGMEA, suggesting that termination and escalation of factories will require BGMEA agreement, whereas the MoU merely references “collaboration” on the escalation process. The language of the MoU is giving rise to different interpretations, and more clarity is urgently required.

The MoU does not, however, provide clarity on what will be the new institution’s decision-making structure, finance mechanism, or enforcement mechanism -- including whether this new institution will have the same legally binding nature as the Accord. This means that serious questions raised by the addition of a new stakeholder (employers) to the programme remain unaddressed; for example, whether the labour side will continue to have half of the votes in the governance structure or could soon be outvoted by brands and employers together.

It is also unclear what the apparent exclusion of NGO watchdogs from this new body will mean for the future levels of transparency of this institution and how this should be interpreted in a country where trade unions' fundamental freedom to organize and speak out remain under extreme pressure.

The insistence on a time-bound transition process raises the question as to what has happened to the agreement reached with the BGMEA and government of Bangladesh in 2017, which stated that the Accord would only transition its tasks to a Bangladeshi safety body if that organization could first be shown to meet strict, jointly agreed-upon readiness criteria.

For the sake of garment workers in Bangladesh, it is of utmost importance to get assurance that the new institution will operate on the same principles and criteria that make the Accord so credible and successful in keeping workers safe. This includes: