Surviving the Maquila: The impacts on Nicaraguan women’s bodies 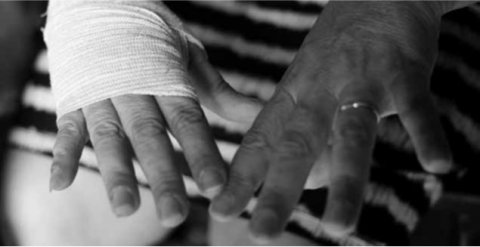 The Maria Elena Cuadra Movement of Working and Unemployed Women (MEC) in Nicaragua has published a new report on the heavy toll that garment manufacturing work takes on women’s bodies, overall health and wellbeing, and families. The report is based on testimonies from ten women garment workers, dismissed from their jobs, who live with chronic and debilitating musculoskeletal injuries. It calls on brands and factories to uphold their corporate social responsibility obligations and demands that the Nicaraguan government take responsibility to protect workers’ rights in the country’s garment sector.

Sandra Ramos, coordinator of the report and executive director of MEC provides a brief contextual and historical analysis of the maquila sector, pointing to the arrival in 1992 of the Free Trade Zone system with its low-wage jobs and lack of labour rights protections, as well as the failure of most factories to adhere to health and safety regulations. This system has created the conditions for the hyper-exploitation of women workers, which has had a tremendously negative impact on women’s bodies – a reality that, she argues, has received little attention in Nicaragua.

The in-depth testimonies and photographs in Surviving the Maquila: The impacts on Nicaraguan women’s bodies highlight the discrimination that garment workers face when they incur chronic injuries due to the intensive pace of production and demanding physical labour. Workers have minimal access to adequate ergonomic equipment at work stations, are dismissed if they can no longer maintain the speed and efficiency that employers demand, or are threatened with dismissal if they complain about pain they have to endure due to a workplace injury or request a leave to visit a clinic. They face pressure from supervisors to speed up their work in order to meet increased production targets. Due to the precarious nature of employment in the garment manufacturing sector, all the women interviewed reported having had to work upwards of 15 hours per day in order to earn enough in production bonuses to be able to feed their families.

This has left workers with debilitating and life-altering musculoskeletal injuries that have had lasting impacts on their lives and their relationship with their families. Many of the women interviewed now have to rely on their children to help take care of them and to be the main household breadwinners. As Yadira del Carmen Juárez Morales’s testimony states, “It is difficult to depend on my family, because I can’t even wash my hair, it hurts all the way down to the skin under my nails.”

The report also highlights how factories have been able to skirt labour code provisions that limit hours of work by relying on loose interpretations of the exceptions to those legal limits – including exceptions in the interest of the common good, force majeure, or labour shortages. These temporary exceptions to the rule then become permanent.

The testimonies also point to the failure of the public health system to properly diagnose workers or to formally recognize their musculoskeletal injuries as workplace injuries. In her testimony, Orbelina Martina Díaz Baldonado, now 70, recounts how she requested permission to go to the clinic after a major fall at work, but her supervisor refused and instead threatened to fire her if she didn’t continue to work. When she was finally able to visit a doctor through the national health system, he told her that she had lost the right to register the fall as a workplace injury because she needed to go to the clinic the same day as it occurred.

Workers have consistently been denied access to pensions otherwise provided under the national healthcare system for workplace injuries. They are therefore left with no social security safety net and are unable to continue working because of their injuries. As the report states, many women are pressured to accept pensions for disabilities caused by common illnesses instead of workplace injuries, which leaves them without access to medical attention or medication for the remainder of their lives. As Reina Isabel Morán describes it, “They send us home, empty-handed, to die.”

Read the full report (in Spanish)