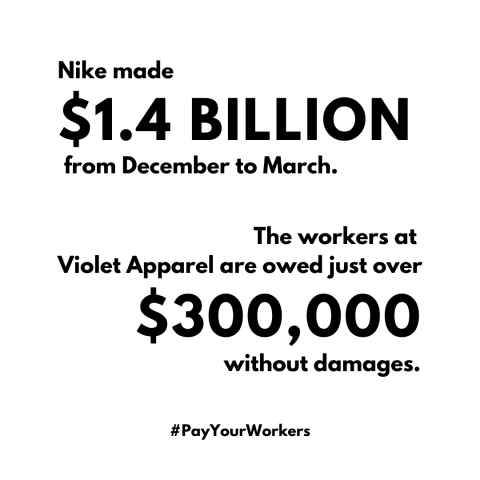 On the April 16 Nike Day of Action, join with Cambodian unions and the global Clean Clothes Campaign network in calling on Nike to take responsibility and fill the gap in wages and benefits owed to Violet Apparel workers.

In Cambodia, over 1,200 garment workers lost their jobs in July 2020 when the Violet Apparel factory suddenly closed. In response, the workers demanded compensation, as well as their legally owed bonuses and unpaid wages.

Nike and Matalan are among the companies linked to the factory. Nike claims to have ended the relationship with the factory in 2006, but photos and testimony of the workers show that the factory was producing Nike clothes as a subcontractor supplier for years.

Ong Chanthoeun, a union leader who worked in the factory for 17 years, explained to Australian Broadcasting Corporation (ABC) news how difficult life has become: "It’s hard to get money for my child’s schooling or to pay the bank, or for medical treatment when my family is sick." While she continues her fight for justice, Nike and Matalan have thus far failed to take responsibility.

In Cambodia, unions are also taking coordinated action to retrieve the wages lost during the pandemic. At the time of the lockdown, suspended workers were paid a maximum of USD 70 per month in assistance, of which USD 30 was paid by their employer and USD 40 paid by the government – less than 40% of the legal minimum wage. Furthermore, bonus payments and seniority indemnity payments were postponed, leaving workers even more destitute.