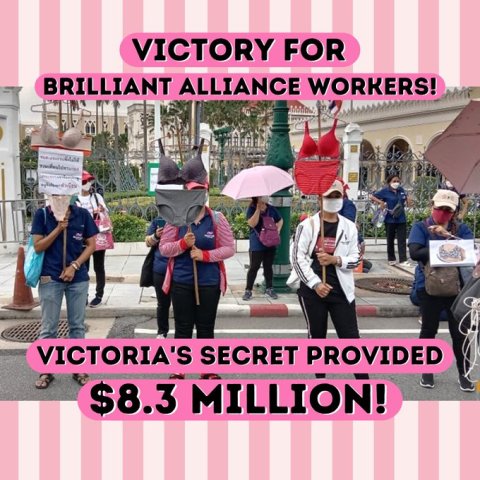 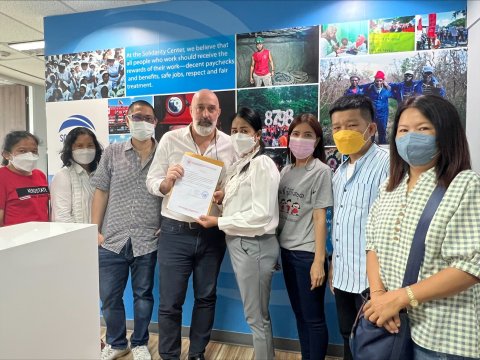 After thirteen months of worker protests and international campaigning, workers from the Brilliant Alliance Thai Global garment factory have finally been paid the US$8.3 million they are legally owed. Victoria's Secret, whose lingerie were produced at the factory, financed the payments through a loan arrangement with the workers’ former employer. This is the largest settlement ever paid in a case of wage theft at an individual factory in the global garment industry.

The factory, which also produced for Torrid and Lane Bryant, closed in March, 2021, citing the lack of orders and the global pandemic as the driving forces behind the closure. More than 1,250 garment workers, many of whom had worked at the factory for 15 years, were left without jobs or severance pay, despite an order from the Thai labour inspector stating that the company should pay all outstanding wages and legal severance. Many of the workers had to take out loans to pay their rent or feed their children in the wake of the sudden factory closure.

The international campaign was led by the Solidarity Center, Clean Clothes Campaign (CCC), and the #PayYourWorkers campaign. The Solidarity Center and Worker Rights Consortium (WRC) engaged with Victoria's Secret to ensure the workers were paid what they were owed. IndustriALL Global Union also organized a regional day of action involving unionists from Australia, Indonesia, Japan, Korea, Malaysia, Mongolia, Philippines and Thailand.

Locally, the workers are represented by the Triumph International Union of the Confederation of Industrial Labour of Thailand, which is affiliated with IndustriALL Global Union.

“This is a huge victory for the workers and a testament to the courage of their union and the strength of the international solidarity campaign that supported them,” said David Welsh, Thailand country director of the Solidarity Center. “Low-wage garment workers left destitute by injustice meted out by global supply chains is nothing new. What’s new is they did not accept their fate—and won. We also hope this represents a model for the type of domestic, governmental, international and brand engagement to resolve future cases where garment workers are left in similarly desperate straits. It’s an historic case given the amount of the settlement and again, hopefully, a model for the global garment industry going forward in terms of direct brand involvement.”

“Our organization has documented hundreds of cases of wage theft in the apparel supply chain,” said Scott Nova, Executive Director of the WRC. “This was the largest theft—and now the most back pay—we’ve ever seen at an individual garment factory. The $8.3 million provided by Victoria’s Secret is also the most any brand has ever contributed to help resolve a wage theft case.”

The parent company of Torrid and Lane Bryant, Sycamore Partners, failed to contribute to the settlement despite the international pressure.

To ensure workers are never again left penniless when factories close, the #PayYourWorkers campaign continues to call on Victoria’s Secret and all other major brands and retailers to sign a binding agreement on wages, severance and freedom of association.