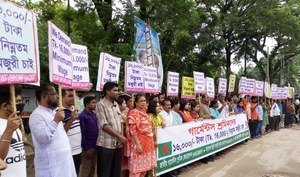 Bangladeshi unions representing workers in the country’s garment export manufacturing sector are demanding an increase in the minimum wage for garment workers to 16,000 taka (US$191) per month.

The current minimum wage of 5,300 taka (US$63), which has remained stagnant for five years, is one of the lowest in the world for the sector.

The three Bangladeshi union federations lobbying for a 16,000 taka minimum wage are members of the IndustriALL Bangladesh Council (IBC); however, neither of the federations is represented on the government-appointed National Minimum Wage Board.

Meanwhile the Bangladesh Garment Manufacturers and Exporters Association (BGMEA), which does have representation on the Board, is proposing a minimum wage increase to only $75 per month.

In a Solidarity Statement, released one day prior to the July 8 Minimum Wage Board meeting, the Clean Clothes Campaign (CCC) shared the following quote from National Garment Workers Federation president Amirul Haque Amin: “The owners, the government and the buyers should consider that the workers’ health and quality of life affect the production process, and the products that come out of it. Large volume and quality production cannot be expected when workers are hungry, in poor health and unable to meet basic needs.”

In the aftermath of the violent crackdown on worker protests for a decent wage in December of 2016, and in light of the arbitrary arrests and increased threats to freedom of association earlier this year, there are serious concerns for the safety of workers calling for the minimum wage increase.

MSN will continue to monitor the wage struggle in Bangladesh and joins with our allies at the CCC in declaring our solidarity with the Bangladeshi garment workers’ struggle for decent wages and our support for their demand for a $191 minimum wage.