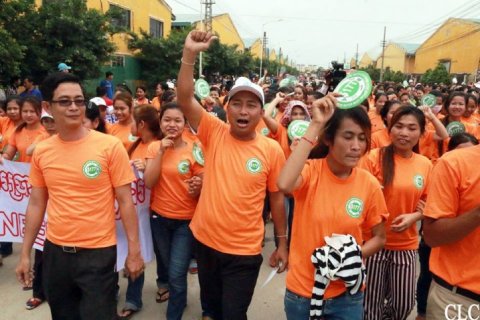 The six labour leaders had been charged for their alleged involvement in protests by garment and footwear workers demanding an increase to the minimum monthly wage to US$160. On January 3, 2014, the military police fired on peaceful protesters, killing four and injuring 27.

Serious discrepancies between the original charges laid, and those read in the final verdict, along with a dearth of evidence and testimony presented during the trial to support those charges, have set off alarm bells nationally and internationally as Cambodian trade union federations and civil society organizations, Global Unions and international labour rights organizations call for the verdict to be overturned.

On December 14, five global union federations released a joint statement condemning the conviction of the six union leaders. Their statement expressed “grave fears that these suspended sentences will be used to imprison the convicted if they engage in any protest action over the next five years…” It went on to say the December 11 decision “may be viewed as a ploy by the Royal Government of Cambodia to both appease the international community by bringing the case to an end, whilst maintaining the lingering threat of imprisonment that all six convicted faced before the case was brought to trial.”

On December 24, a second public statement condemning the convictions was released, which was signed by 95 organizations in 27 countries. In that statement, Brian Adams, Asia Director for Human Rights Watch, calls on the EU, US and other foreign governments to “consider these convictions a clear blow against independent trade unions and labour rights, and not some indication of Cambodian government leniency.”