Voting without fear: Workers at Manufacturas VU win the right to an independent union 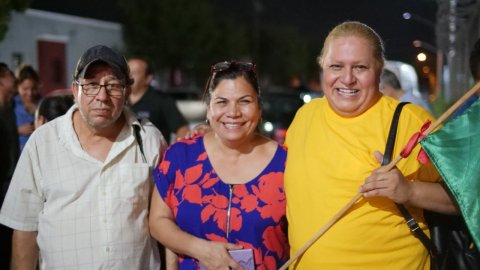 On August 31, 2022: workers at the Manufacturas VU maquila factory in Piedras Negras, Coahuila participated in their first democratic election on who would represent them in negotiations with their employer on their wages, working conditions, and rights at work.

295 workers took part in the secret-ballot vote to choose between two unions: the Confederation of Mexican Workers (CTM) or the Mexican Labour Union League (La Liga). By the end of the day, the workers’ response was overwhelming: 186 votes for La Liga and 101 for the CTM.

MSN’s long-term ally, the Border Committee of Women Workers (Comité Fronterizo de Obreras - CFO), played a critical role in the workers’ organizing effort at the factory from the beginning, working in alliance with the La Liga. Two weeks after the victory vote, MSN spoke with CFO Director Julia Quiñonez, about the organizing process and events leading up to and immediately after the vote.

Asked what motivated a group of workers to organize to improve their working conditions, Julia responds emphatically: "They were fed up with the constant abuse, labour violations, harassment in all its forms, working 12 to 14 hours a day for a weekly salary of 700-800 pesos after deductions, approximately US$40."

Julia notes that the union victory did not happen overnight. “Since last year, the workers have been looking at how to get out of this vicious cycle. And, they knew very well how these companies react when they learn that workers are organizing, which is why they started with a low-profile approach to make a plan. One person could not do it alone. There was a lot of awareness raising, house visits, one-on-one conversations between workers.”

However, in June of this year the company found out that the workers were planning to form an independent union and it invited the Confederation of Mexican Workers (CTM) into the workplace. According to Julia, CTM representatives, with the company’s authorization, called a meeting of the workers in the cafeteria where they announced that the company had already agreed to sign a collective bargaining agreement with the CTM. “"The workers reacted. They had already participated in [CFO] trainings, so they began to speak up and ask questions." They knew that the labour reforms prohibited this level of interference by the company in union affairs. According to Julia, the first worker who spoke up and raised questions was fired, and other workers were suspended. “Many more workers were suspended over the next several weeks. However, the company has never admitted to intervening in favour of the CTM, claiming that they arrived ‘on their own’.”

Complaint filed under CUSMA Rapid Response Mechanism
La Liga adopted two complementary strategies to defend the workers’ rights. They filed a complaint with the rapid response mechanism of the Canada-United States-Mexico Agreement or CUSMA (known as USMCA in the US and T-MEC in Mexico). La Liga also petitioned the Federal Centre for Conciliation and Labour Registration for a certificate of representivity verifying that they represented 30 percent or more of the workforce and were therefore entitled to negotiate a collective bargaining agreement at VU.

According to Julia, the company did not believe the new union was capable of filing the rapid response complaint. “We told them if you don’t stop [your interference], we’re going to use the CUSMA labour mechanism, and you will have to listen to us.” Julia added, “when we went public about the complaint, the company accused the workers of exaggerating the issues, saying ‘because of the firing of one worker, you have detonated an international complaint’.”

The complaint was filed in June 2022. Immediately after it was filed, the Office of the US Trade Representative sent a delegation to the factory to investigate the situation. They collected statements from 39 people, including affiliates of both unions, as well as company and CTM representatives. “They interviewed all parties and everyone gave their version of events, and in the end, the result was that they did find rights violations,” explains Julia.

On July 21, US Trade Representative Katherine Tai announced that the complaint against Manufacturas VU had been accepted. The US government accepted the complaint after finding evidence that the factory violated the right to freedom of association and collective bargaining by giving the CTM opportunities to organize at the factory without granting the same opportunities to La Liga. A week later, Mexico accepted the case and began their own investigation.

Competing for Certificate of Representivity
Meanwhile, the process of obtaining the certificate to represent the workers continued. The CTM also requested the certificate, and as a result the Federal Centre set August 31 as the election date for workers to choose which union would represent them.

According to Julia, the company made it easy for the CTM to seek workers' support. “They even gave them a list with all of the employee data. The CTM arrived with the affiliation forms ready for the workers to sign. Both the company and the CTM were saying that if the workers voted for the independent union, the factory would close, and the workers would not find work in any other company because the CTM is in all the other factories.”

“Meanwhile, La Liga delegates were not allowed to leave their work stations. They were disciplined. They were suspended. Management did not let anyone approach them, and they were under surveillance. The CTM had privileges. They could move throughout the factory to recruit people. They put up a lot of publicity. They came to the factory every day. They brought cake, snacks, and soft drinks. They gave away food.”

The election
A week before the election, La Liga held an assembly where their members agreed to make a symbolic show of force to raise people’s spirits and send a message to company. Two days before the election all their supporters would go to work wearing a yellow shirt. “On the agreed upon day, a yellow tide ran through Piedra Negras,” remembers Julia. "It was amazing. The whole plant was dressed in yellow."

According to Julia, the CTM response was immediate. “They began to make a series of threats, telling the workers that they had written down the names of all the workers who were wearing yellow shirts, and were watching them.” In addition, continued Julia, “the company threatened to close the factory if they voted for the Liga.”

The vote started at 5:00 p.m. External observers included representatives of the Federal Centre, the ILO and the National Electoral Institute (INE). Meanwhile, national and international supporters of the workers gathered outside the factory to demonstrate their solidarity. “Before the vote started, we put up a big tent and banner that read “VOTE WITHOUT FEAR”, says Julia. “It was like a party for democracy. Hours passed as the vote proceeded, and at 10:30 p.m., we received the first numbers from the vote count: La Liga was ahead. And in the end La Liga won.”

Asked about immediate next steps, Julia says they are focusing on building union democracy. “A negotiating committee is going to be elected, delegates are going to be elected… and workers are being consulted about what they would like to see included in the collective bargaining agreement….”

On September 14, the governments of Mexico and the United States announced the closure of the complaint against Manufacturas VU. The US government statement reads: “Workers at Manufacturas VU Auto Components facility now have a union – chosen through a fair election – with whom they are consulting as they prepare for negotiations for their first collective bargaining agreement.”