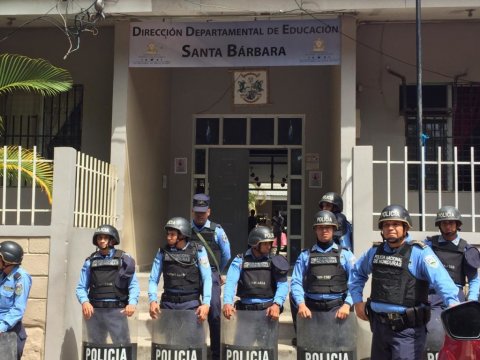 Launched by teachers and health care professionals in response to two government decrees aimed at further privatization of the already deteriorating health and education systems, the protests were quickly joined by activists from other sectors. The Platform for the Defense of Health and Public Education, a coalition of union and community organizations formed in early May, has been playing an important coordinating role since April.

The protests come 10 years after the coup that deposed President Jose Manuel Zelaya and brought to power the ruling National Party, now headed by president Juan Orlando Hernandez (JOH). The coup set in motion a decade of political crises, violence, militarization and repression, including assassinations of an alarming number of human and labour rights activists, indigenous leaders, and journalists.

As this latest wave of protests and blockades spread throughout the country, the demands have broadened to include calls for an end to government corruption, militarized violence and repression, and the resignation of Juan Orlando. “Out with JOH” has become the movement’s rallying cry.

Government response to the protests has been brutal, including the indiscriminate and excessive use of tear gas and rubber bullets against protesters. Amnesty International calculates that since June, at least 80 people have been injured and six killed – four of whom were the result of firearms engaged by security forces.

Demonstrations and road blockades are now regular occurrences in the northern municipalities around San Pedro Sula, where the majority of maquila factories are located. On July 1, police shot and killed 22-year-old Joshua Sánchez, union president at the Gildan Activewear garment facility in Villanueva. Three other union members were also injured during the protests. Gildan is a Canadian company that owns a number of garment and textile factories in the San Pedro Sula region.

In response to the government crackdowns, state and criminal violence, and the crippling of social services, thousands of Hondurans continue to flee the country, risking their lives by joining caravans heading north with the faint hope of crossing Mexico’s northern border and making a new life in the United States.

Recent reports and updates in English and Spanish: