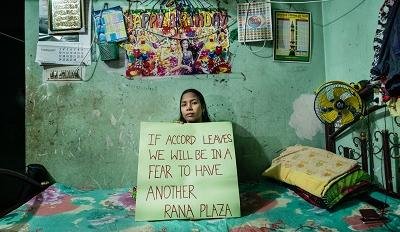 On January 29, 30 and 31, the Clean Clothes Campaign (CCC) and International Labor Rights Forum (ILRF) will be organizing protests outside Bangladesh embassies in the US and Europe in support of safe factories, living wages and an end to repression against workers mobilizing for decent wages.

Over the past few months, the Bangladesh government and garment industry association (BGMEA) have been supporting a court challenge to prevent the Accord on Fire and Building Safety from continuing its live-saving work or to impose an unreasonable set of conditions that would make it virtually impossible to carry out that work.

On January 21, the Supreme Court once again postponed its ruling on the future of the Accord, this time until February 18, in order to give the labour and company Accord signatories, the BGMEA and the government sufficient time to find a solution to the impasse. However, the court noted that this will be the last extension.

The Accord has long committed to handing over its functions to a suitable national regulatory body, however the government’s Remediation Coordination Cell (RCC) is still in an early stage of development. There is broad consensus among stakeholders, including the International Labour Organization (ILO), Bangladesh’s major trading partners, and international clothing brands, that the RCC is not yet ready to perform the inspection tasks of the Accord and has no proven record of enforcing safety in the factories under its purview.

Meanwhile, Bangladeshi garment workers have been mobilizing for a decent increase in the minimum wage. At the end of December, approximately 50,000 workers walked out of their factories to protest the new minimum wage of US$94 a month, which came into effect on December 9, 2018. On January 8, one worker was killed and over 50 injured when Bangladesh police forces attacked close to 5,000 striking garment workers.

Over the eight days of intensified worker protests, police used rubber bullets, tear gas and water cannons to disperse the crowd, which had doubled in size since the violent Tuesday clash. Since then factories have shut their doors and hundreds of workers have been fired for participating in the wage protests.

For more information and to take action