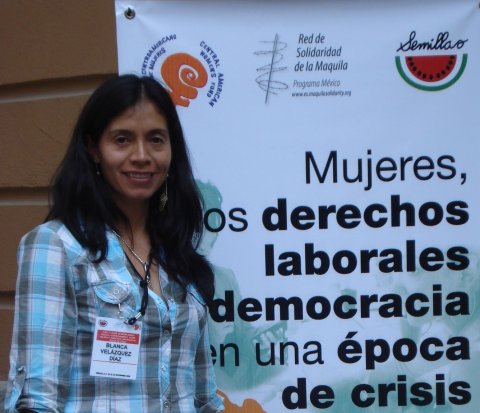 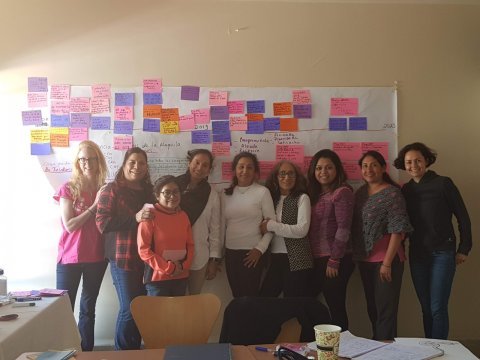 Blanca with colleagues from the Network of United Women’s Labour
Rights Defenders (Red DLUM) in October 2019. 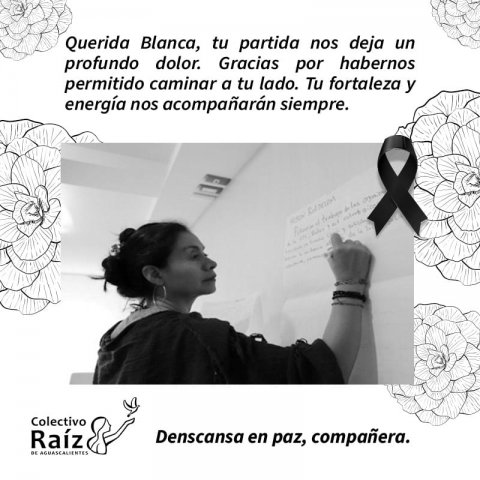 On September 24, 2021, the MSN learned that our dear friend of twenty years, and internationally esteemed labour rights defender, Blanca Velázquez Díaz, had passed away from cancer. For 18 months, Blanca navigated this phase of her life with hope, determination and grace, accompanied by the love and solidarity of the labour rights community that she was instrumental in building in Mexico.

Although her life became much more challenging in 2020, Blanca remained firmly committed to improving conditions for workers in Mexico’s maquila industries. Supporting her colleagues, she ensured that the Centro de Apoyo al Trabajador (Worker Support Centre, CAT) continued to educate and organize workers, as well as document and denounce labour rights violations as they intensified during the Covid-19 pandemic.

When it became clear that her life was ending, Blanca channeled much of her energy into ensuring that the CAT would live on beyond her passing. Today the team that she built at the CAT is carrying the vision forward.

Blanca was a naturally gifted and passionate leader who rose to prominence in 1999 when she was elected General Secretary of the union at the auto-parts plant where she worked in her home state of Puebla. In an industry dominated by men, a country where only 8% of unions are led by women, and a state known for its violence against women, this was a great achievement that reflected Blanca’s bold and brilliant character.

Blanca went on to found the CAT in 2001. The grassroots worker centre has inspired and supported countless workers to organize and stand up for their rights in the textile, garment and auto sectors in Puebla, Morelos, and across Mexico. In 2018 she also helped found the national Network of United Women’s Labour Rights Defenders (Red DLUM), to which she was elected President in 2019.

Blanca’s work as a labour rights defender was inspiring and personally fulfilling, but also arduous and dangerous. In 2011, after months of escalating harassment, the CAT’s offices in Puebla were ransacked, death threats were graffitied onto a wall, Blanca received death threats through her own hacked email account, and a staff member was kidnapped and temporarily disappeared. When the staff member was released, he was instructed to warn Blanca that she would be disappeared if the CAT continued to support a worker-led campaign to form an independent union and oust a corrupt union from their auto-parts plant.

At this crucial moment in the campaign, international labour and human rights organizations, including the MSN, convinced Blanca to temporarily leave Mexico and generate support for the struggle throughout Europe, the United States and Canada.

In 2013, shortly after her return to Mexico, she was awarded the Oscar Romero Award for Human Rights from the Rothko Chapel. She received this recognition of her bravery and selfless activism from the hands of another female warrior for workers’ rights, Dolores Huerta. Previous recipients of the award include the Dalai Lama and Nelson Mandela.

The worker rights struggles that Blanca led and participated in shaped her profoundly. She became a proud and unwavering feminist, but one who never excluded men from her vision collective power and independent trade unionism. Guided by an analysis of the gendered nature of labour exploitation, she devoted most of her energies to accompanying and empowering women workers, and to standing in solidarity with women, human and labour rights defenders throughout Mexico.

Blanca loved her home state, but could never again work there directly after the violence of 2011. Instead, she developed new organizing and training efforts in neighbouring states, and carried poblano culture wherever she travelled. Blanca was also tremendously energizing and fun to be with. Work meetings with her were intense, but infused with laughter, treats she shared from Puebla, and the anticipation of sharing food, stories, and mescal after the work was done.

Honest and authentic until the end, Blanca died as she lived. Despite her devastating diagnosis, she continued to share her joyous smile, mischievous sense of humour, generous heart, courageous spirit, and unbreakable conviction in workers’ and women’s rights until she passed. Thanks to Blanca’s clarity of vision, tenacity, creative tactics and daily on-the-ground work, many thousands of maquila workers and their families in Puebla, Morelos, and across the Americas, have been and will continue to be inspired to organize for change.

MSN is joining with other Mexican and international labour, women’s and human rights organizations and individuals in presenting Blanca Velázquez Díaz and the CAT as a candidate for the Tata Vasco award of Jesuit University System to honour her for her defense and promotion of human rights.

Blanca, you were and always will be a brilliant inspiration to all of us. We love you and miss you. ¡Viva Blanca Velázquez Díaz! ¡Qué viva!