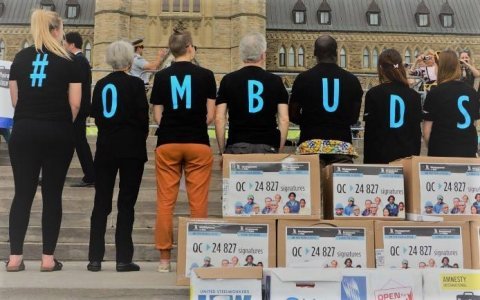 On April 8, the Canadian government announced the appointment of the long-awaited Canadian Ombudsperson for Responsible Enterprise (CORE), but failed to live up to its commitment to grant the position the necessary independence and power to investigate abuses and redress harm caused by Canadian mining, oil and gas, and garment companies operating abroad. Several human rights, union, labour, international development and faith organizations have voiced their dismay over the announcement.

Fifteen months ago, the government announced that it would establish the office of the Ombudsperson, and that the person appointed would have real investigatory powers and independence. Instead, on Monday, International Trade Diversification Minister Jim Carr announced the appointment of what amounts to a special advisor, as opposed to an independent Ombudsperson with the power to compel documents and testimony, under oath. Carr stated that more legal study was necessary to define the extent of the position’s powers – a decision that has drawn a great deal of criticism from organizations that have campaigned for the creation of the office for a number of years.

According to Emily Dwyer, Coordinator of the Canadian Network on Corporate Accountability (CNCA) “An ombudsperson in name only is not an ombudsperson. It is simply more of the same approach that has already been proven empty and ineffective… Fifteen months into this process, news of a review is outrageous. We don’t need more studies. We need action.”

MSN joined the CNCA when the Canadian government unexpectedly added the garment industry to the list of Canadian extractive industries operating abroad that the Ombudsperson would have the power to investigate. With this announcement, we see the tremendous weight that industry lobbying has over government decision making and action in spite of ongoing reports of human rights violations connected to Canadian mining companies and garment supply chains.

We join other organizations in calling on the Liberal government to live up to its fifteen-month old promise and ensure the newly appointed position is independent and effective, with the power to compel evidence from Canadians and Canadian companies.