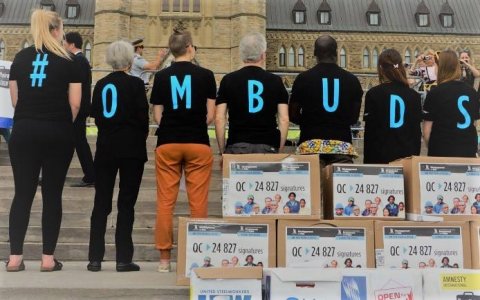 News release from the Canadian Network for Corporate Accountability:
Ottawa, July 11, 2019 –Today all fourteen civil society and labour union representatives of the government’s Multi-Stakeholder Advisory Body on Responsible Business Conduct Abroad (Advisory Body) tendered their resignations. The unanimous decision to resign is due the erosion of civil society and labour unions’ trust and confidence in the government’s commitment to international corporate accountability.

In January 2018, the government publicly announced the creation of a Canadian Ombudsperson for Responsible Enterprise (CORE) and committed to entrusting the office with the necessary tools to conduct credible independent investigations, including the power to compel documents and summon witnesses. This announcement was endorsed by civil society and labour groups, who promoted the CORE to their national and international partners. The government’s decision to backtrack on its promise in April 2019, and instead appoint a special advisor to the Minister of International Trade Diversification without needed investigatory powers, has amounted to a betrayal of civil society and labour unions’ trust, erosion of our confidence and concerns that the government has not acted in good faith during consultations on this topic.

The creation of the promised independent ombudsperson office has faced repeated delays, over multiple years. Organizations have continued to wait for further developments over the past three months, since the April 8, 2019 announcement of an independent legal review on the CORE’s investigatory powers. Minister Carr indicated on that day that the review would be completed within 4 to 5 weeks, and made public shortly thereafter. Three months later, the study has not been made public, the CORE remains without meaningful powers to serve impacted communities and workers. Civil society believes the government will not provide the promised investigatory powers before the upcoming federal election.

The government may commit to passing legislation to provide investigatory powers in the future. Civil society instead has called on government to make use of the credible and well-substantiated proposal to grant investigatory powers now, via the Inquiries Act, as a bridge towards legislation in the next government. This has reportedly been determined to be a feasible option by the independent legal review. Civil society views the refusal to take that step now as further evidence that the commitment to  take bold action to uphold human rights is no longer a priority.

In this context, the organizations have lost faith in the ability of the Advisory Body to function as originally envisioned and according to its agreed upon terms of reference.

“It was because of assurances that the CORE would have independence and real investigatory powers that we stood alongside the government in January 2018 and we promoted the announcement both nationally and internationally. Because of these commitments, I was pleased to take up the role of vice chair to the Advisory Body,” said Alex Neve, Secretary General, Amnesty International Canada. “The government of Canada’s decision to backtrack on those promises, despite ongoing assurances to do so over the past year, has led me to lose confidence. I will no longer be able to continue in this role.”

“Our partners around the world have suffered human rights abuses linked to Canadian companies for far too long,” said Emily Norgang, Senior Researcher, Canadian Labour Congress. “They rejoiced at the government’s 2018 promises, which had been hard-fought and long-awaited. Now they are being told that they need to wait again; that maybe an effective office might be put in place in a few years’ time. This is an unacceptable way to respond to serious human rights abuses.”

“Without independence and investigatory powers, the CORE amounts to nothing more than a broken promise. A powerless CORE won’t serve impacted communities. In fact, it has all the hallmarks of the failed offices it is supposed to be replacing. It is like giving someone a car, but telling them that the gas tank won’t be installed for two years,” said Emily Dwyer, Coordinator, Canadian Network on Corporate Accountability. “How can civil society have any faith that law and policy reform discussions at the Advisory Body will be fruitful when the government has bowed to industry pressure and reneged on concrete commitments regarding the ombudsperson?”

Civil society and labour members of the Advisory Body note that the only way that the government can restore trust is by replacing the CORE’s mandate by an order pursuant to the Inquiries Act, as a bridge towards legislation in the next government.

Making use of the Inquiries Act at this time would signal to civil society and impacted communities around the world that this office can be seen as credible and that this government is taking concrete action to advance human rights. The government’s own study will reportedly confirm that the federal government has the legal authority to do so.

Members of the MSAB announcing plans to issue their resignations today include:

Alternate Members of the MSAB announcing plans to issue their resignations today include: