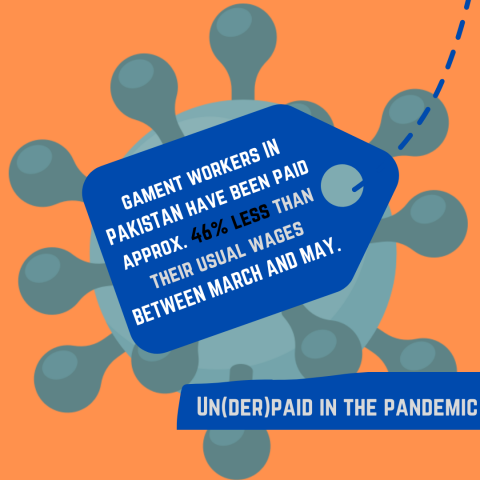 Millions of garment workers around the world have not received their regular wages, or have not been paid at all since the start of the Covid-19 pandemic, reveals a new report launched today by Clean Clothes Campaign.

The report, "Un(der)paid in the pandemic,” analyzes nonpayment and underpayment of wages to garment workers during the months of March, April and May resulting from order cancellations by apparel brands, unpaid leave imposed on workers by employers, and state-sanctioned wage cuts during the Covid-19 crisis.

Based on a review of news reports and information from worker organizations, with the support of the Worker Rights Consortium, we estimate that across South and Southeast Asia, garment workers have received 38% less than their regular income. In some regions in India, this number rises above 50%. Extrapolating these findings to the global garment industry, excluding China, a conservative estimate of wages lost by garment workers for the months of March, April and May would amount to between US$3.19 and 5.78 billion.

Khalid Mahmood, of the Labour Education Foundation in Pakistan, says: "Many workers in the garment and textile industry have not been paid or have been underpaid because of order cancellations and Covid-19 lockdowns. As these workers were already living on poverty wages, they had not been able to save anything before the pandemic hit. The wage gaps caused by the crisis mean that workers are not able to feed their families properly, they are not able to pay for school fees of their children or pay for medical expenses and that many of them are in debt. Most migrant workers had to go back to their villages and now it is becoming even more difficult for them to get back to their jobs and survive in big cities.”

David Hachfeld, of Public Eye/Clean Clothes Campaign Switzerland, says: “Because of lack of systematic data we had to base our estimates on assumptions and limit our research to seven countries in South and Southeast Asia. We have, however, no reason to believe the situation is significantly better in low-wage production hotspots that we did not research. Even though our estimates stay on the conservative side, they are quite shocking. We deduce in Indonesia and Bangladesh workers were collectively withheld respectively over US$400 million and 500 million in owed wages over three months.”

In El Salvador, as of July 2020, worker rights organizations report that at least 71,000 garment sector workers have been placed on temporary suspensions. While some larger factories paid approximately 50% of salaries to workers, and some workers were paid two week’s salary, to date, a significant number of Salvadoran garment workers have not received any wages since the onset of the pandemic. Based on this estimate, Salvadoran workers have been deprived an estimated US$8.4 million.

Lynda Yanz of the Canada-based Maquila Solidarity Network says: “Although the report does not include data from Mexico or garment-producing countries in Central America – other than El Salvador – we know from reports we receive from trade union, women’s and labour rights organizations in those countries that there is a massive gap between the wages workers were being paid before the pandemic and what they are receiving now, even as many workers are returning to their jobs.”

The Clean Clothes Campaign calls on apparel brands, retailers, and e-tailers to take responsibility to ensure that all workers in their supply chains receive the full wages they are owed in accordance with labour law and/or international standards by publicly committing to assure that workers making their products receive their full a wage assurance (see link below). This would require brands to commit to soliciting funds from governments and international institutions, provide direct contributions and work together with other stakeholders – going beyond what is outlined in the International Labour Organization’s (ILO) Call to Action – to ensure that all workers making and handling their products receive the wages they are owed.

Since launching this proposal in June, the Clean Clothes Campaign has reached out to dozens of brands and initiated conversations with many of them on their responsibility to ensure the workers who make their clothes receive their full wages.

Christie Miedema, from the Clean Clothes Campaign International Office, says: “We welcome collaborative action among brands and retailers to ensure that they have sufficient leverage and share the costs of workers’ wages. We are asking brands individually to make a public commitment to avoid a situation in which everyone in a supply chain has responsibility, but in practice nobody assumes responsibility. Only if brands and retailers individually and publicly commit to a wage assurance can we avoid the traditional habit of pushing risks and responsibilities to others in the supply chain and make sure workers are not left covering the gap.”