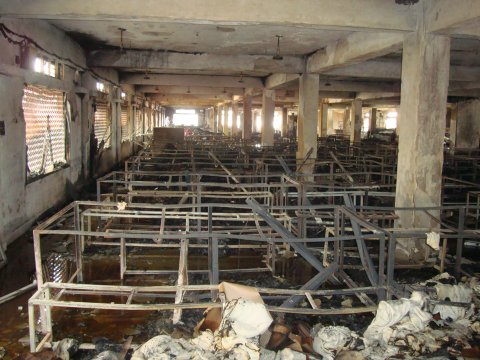 The report, Evaluation of H&M Compliance with Safety Action Plans for Strategic Suppliers in Bangladesh, analyzes publicly available information regarding the level of progress H&M has achieved in addressing safety hazards in its factories in Bangladesh.

The data is derived from factory inspection reports and Corrective Action Plans (CAPs) publicly disclosed by the Accord on Fire and Building Safety in Bangladesh (“Accord”). H&M signed the Accord in the wake of the 2013 Rana Plaza building collapse, which killed 1,138 workers, and was the deadliest disaster in the history of the global apparel industry.  The company is the largest single buyer from the Bangladesh garment industry.

The analysis shows that H&M has not honoured its commitments to ensure the safety of the workers in Bangladesh who sew its clothes. Focusing on the subset of contract factories that H&M has deemed the best performers in its supply chain on labor and environmental issues, the report shows that all of these factories have failed to meet mandated time frames for repairs and the majority of all renovations have still not been completed despite lapsed deadlines.

The outstanding renovations include the installation of fireproof doors, the removal of locking or sliding doors from fire exits, and the enclosure of stairwells -- meaning that in many factories workers may be unable to safely exit a factory in an emergency.

According to the report, “H&M has been contacted by the unions that are the labour signatories to the Accord and has been asked to account for the severe delays in safety renovations at its factories by September 1, 2015. The unions have asked H&M to outline the reasons for the delays and to enumerate any steps the company is taking to address the problems.”
Prior to the publication of the report, H&M had failed to respond to the unions’ request.

On October 6, the company released a public statement, admitting that there have been delays, but claiming that it is now “looking at how we, together with other buyers and global unions, can push the work forward.”