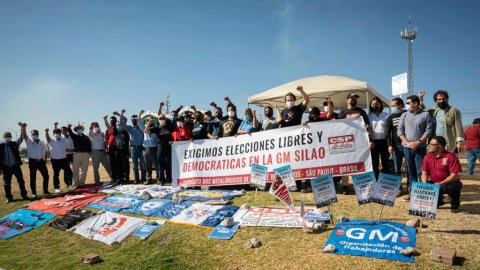 Unions and other worker rights organizations show their solidarity with
GM workers near the plant in Silao. Credit: Arturo Left and Ulises Vidal

The independent union SINTTIA has won a precedent-setting vote among four unions competing to represent over 6,000 workers at the GM Silao pickup truck factory in Guanajuato, Mexico in negotiations for a new collective bargaining agreement.

In addition to election monitors from the Secretariat of Labour and Social Welfare (STPS) and the Federal Centre for Conciliation and Labour Registration (CFCRL), accredited observers included representatives from the National Electoral Institute (INE), National Human Rights Commission (CNDH), as well as independent labour rights experts from other countries. Although the Mexico office of the International Labour Organization (ILO) was also invited to observe the vote, it declined the invitation.

The victory builds on the results of an August legitimation vote in which GM Silao workers had rejected the existing collective bargaining agreement (CBA), which had been signed by a CTM union. In April 2021, the initial legitimation vote had been suspended by labour authorities half-way through the process when destroyed ballots were discovered in the union office. The August repeat legitimation vote was successfully carried out with no major irregularities.

Since that vote, however, SINTTIA supporters continued to face harassment and discrimination by company management and the CTM union. On the Sunday prior to the February 1-2 vote, the SINTTIA Secretary General, Alejandra Morales Reynoso, received threats from three unknown individuals at her home.