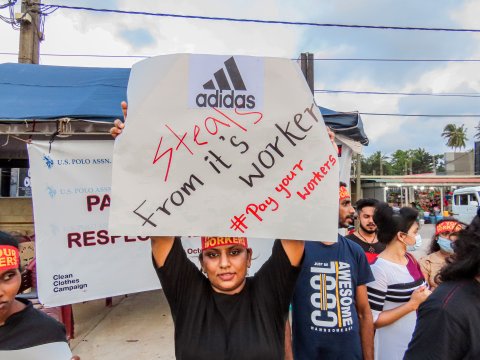 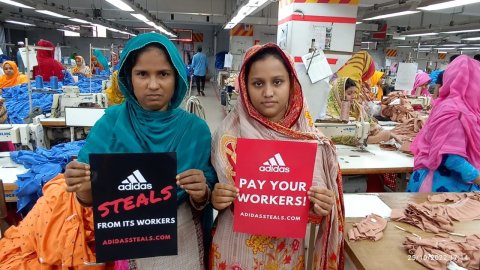 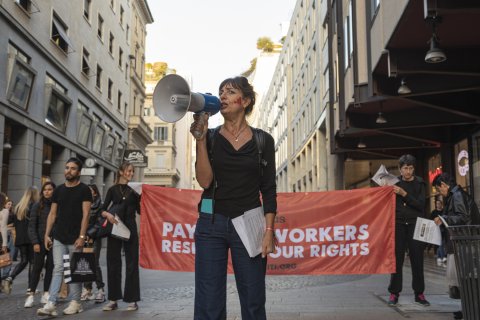 From October 24-28, workers who make adidas products took to the streets demanding an end to pervasive wage theft and union-busting.

In more than a dozen countries, including Pakistan, Cambodia, Italy, the United States and Canada, unions and workers' rights groups protested at adidas supplier factories and stores in a united chorus to tell the brand: it’s time to #PayYourWorkers and #RespectLabourRights. In Myanmar, striking workers called on adidas supplier Pou Chen, which dismissed 26 union members this week, to stop retaliating against their union and agree to a wage increase. Demonstrations in Germany brought together activists in flash mobs in Leipzig, Muenster, and Cologne, and in Italy, a public poster campaign raised awareness about adidas' responsibility to the workers who make its products.

“With adidas’ reluctance to end its lucrative deal with Kanye West despite his antisemitic comments, the world saw something garment workers have known for decades: adidas will only do the right thing when forced to by public outrage,” said Nasir Mansoor, General Secretary of the National Trade Union Federation in Pakistan.

Garment worker unions have been demonstrating for months to bring attention to the brand’s history of wage theft and anti-union repression in its apparel and footwear supply chains. The Pay Your Workers campaign, endorsed by 260 civil society organisations around the world, including dozens of unions representing garment workers, is calling on adidas to respect workers’ rights in its supply chain.

Some workers who sew for adidas have been fighting for years for the compensation they’re owed. "In April 2020, I was told to put a thumbprint on a document to receive my wages. Hidden under the pay slip was a line stating it was a notice of resignation. That day I was scammed along with all my other coworkers; we lost our jobs," said Chhom Chhorpesal, a former employee at Hulu Garment, an adidas supplier in Cambodia. "Hulu Garment has refused to rehire many of us and never gave us severance, claiming that we voluntarily resigned. We are calling on adidas to ensure we get paid. Adidas should also sign the Pay Your Workers agreement to help ensure that other workers don't have to suffer after their severance is stolen from them."

“We are part of the #PayYourWorkers campaign because we’ve seen how these massive brands set dangerously low standards for the entire industry. By enabling serial wage theft in its supply chain, adidas is sending a clear message that it doesn’t care about the workers who make its products,” said Iwan Kusmawan, Chairman of the National Workers’ Union (SPN) in Indonesia.

“It’s a critical moment for solidarity from workers all over the world and all throughout the supply chain. Adidas executives have shown that they will only do the right thing when their massive profits are threatened. It’s time to show them we won’t stand for stealing from the very workers who make those profits possible,” said Rukmini Vaderapura Puttaswamy, President of the Garment Labour Union in India.

A new campaign website notes that, as one of the largest sports apparel companies in the world, adidas has a great opportunity – and obligation – to take action to meet its commitments to garment and footwear workers by joining negotiations with union representatives to sign a legally binding agreement that would ensure remediation for wage theft and respect for workers’ rights.