Response to High Court hearing on the Bangladesh Accord 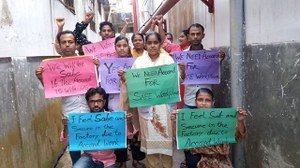 On November 29, the Bangladesh High Court conducted a hearing following the appeal filed by the Bangladesh Accord against the restraining order on its Bangladesh operations. The restraining order was due to take effect today. A new hearing by the High Court was subsequently re-scheduled twice and will now take place on December 17, and the restraining order has been lifted until that date. The hearings have taken place amidst mounting international pressure and calls from the international community for the permanent removal of the order. Given the grave consequences expulsion of the Bangladesh Accord would bring for workers and the overall garment industry, it is imperative that this threat be permanently ended next week.

A joint statement from the Global Union Signatories and the NGO Witness Signatories to the Accord was released on December 10. calling on Bangladesh’s trading partners and global apparel brands to press the government of Bangladesh to refrain from imposing these shocking impediments to the Accord continuing its life-saving work.

As is widely recognized by observers around the world, Bangladesh’s national regulatory apparatus -- the Remediation and Coordination Cell (RCC) -- is not prepared to take on the responsibilities of the Accord’s inspection program, despite the Government’s claims to the contrary. All evidence points to a lack of readiness, including a recent report by the Bangladesh Sustainability Compact -- a cooperation agreement between Bangladesh, the European Union, the United States, Canada, and the International Labor Organization -- which shows that the national inspectorate fails to act transparently and has only one third the amount of inspectors to monitor twice as many factories as are currently covered by the Accord. The Bangladesh Department of Inspection for Factories and Establishments, which carries out inspections for the RCC, reports a woefully low 29% completion rate for mandatory safety renovations at factories the government is ostensibly regulating. The average progress at Accord-covered factories is 90%. Until the Government of Bangladesh demonstrates the capacity and political will to regulate the industry, the Accord is essential to protect the safety of workers.

Because the Accord is a three-year binding agreement between unions and apparel brands, it will remain in effect through 2021. Every Accord brand will continue to be bound to their obligations under the agreement, including the obligation to cease business with any factory that refuses to operate safely. However, without a local office, the Accord would have to use international engineering firms to carry out inspections and its ability to monitor and verify remediation progress at Accord covered factories would be severely curtailed, with grave consequences to workers’ safety and the progress achieved over the past five years. According to media reports, the Accord’s Chief Safety Inspector would be forced to declare hundreds of poorly performing factories ineligible to sell products to any of the Accord’s 192 signatory brands, because the Accord will no longer be able to provide them with necessary help to move them toward the completion of life saving safety renovations in a timely fashion.

Apparel brands, which are bound by due diligence obligations to ensure that their supply chains are safe, should make all future orders with Bangladeshi suppliers contingent on the ability of the Accord to inspect safety compliance at those factories. No brand wants to risk another mass fatality disaster, as brands know it would sully their reputations and constitute the final blow to consumers’ trust in clothes made in Bangladesh.

Bangladesh’s key trading partners should impress upon the Government of Bangladesh that there must be an orderly transition of regulatory responsibilities -- when, and only when, the Government is able to fulfill them -- and not a premature expulsion of the Accord. The Accord and its signatory parties are committed to working with the Government of Bangladesh to hand over the Accord’s inspection and remediation work to a demonstrably capable national regulatory body, when that that body exists. Solutions also need to be developed for aspects of the Accord that are not covered by a national inspection body, such as its complaints mechanism and safety trainings.

By continuing to threaten expulsion of the only credible safety inspection program in the country, the Government of Bangladesh is squandering the good will it has earned over the past five years and is demonstrating rank disregard for worker safety.

(Based on November 29, 2018 statement by the Clean Clothes Campaign)

For more information and to take action:
Joint Statement from Global Union and NGO Signatories to the Accord
#RanaPlazaNeverAgain twitter campaign
Write to the Bangladeshi governmental representatives to "Keep workers safe in Bangladesh"
Statement from international apparel brand, Tchibo