Statement in solidarity with the people of Sri Lanka 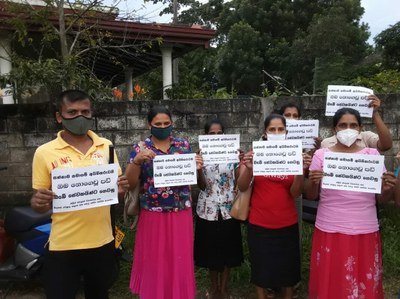 Trade unions and worker rights organizations, including the Clean Clothes Campaign, Labour behind the Label, Maquila Solidarity Network, War on Want and Workers United, express our solidarity with the people of Sri Lanka. We stand with them as they confront the political, social, and economic crisis that has engulfed their country, causing extreme hardship and grave concerns for the future.

This is the result of a crisis driven by international debt that has been unfolding for decades and mismanagement by the previous Sri Lanka government. This has caused catastrophic inflation and the loss of purchasing power; failure of public services including health services, education, and public transport; disruption of economic activity; and scarcity of fuel, cooking gas and oil, and many basic commodities. Importantly, it has caused great hardship for the 300,000, mostly female, garment workers and their families.

The crisis brought protests by masses of people who were angry at the mismanagement and lack of an effective government response. The protests brought down the government and caused the President to flee the country and resign, naming the Prime Minister as Acting President. The Parliament then elected the Acting President as the President through an election by votes of the members of the parliament to complete the term of office.

The acting (now elected) President, from another political party, declared an emergency, mobilized the army, and threatened the protestors to refrain from engaging in violence. The very next day when the new President was sworn in, a group of police and army personnel brutally attacked protestors, including journalists, to clear out the Presidential office, which was occupied by the protestors. This attack by the armed police and army was unnecessary because, according to the protestors, they had already informed the authorities that they would hand over the office peacefully. Therefore, we condemn vehemently this brutal and unprovoked attack on peaceful protesters.

Even before the new president was elected, the trade unions that make up the National Labor Advisory Council (NLAC) issued a call for constitutional, legislative, and emergency administrative measures to deal with the crisis, ensure democratic processes and rights, curtail the executive presidency, and prevent a repressive, authoritarian outcome. The letter sent by the Unions to Presidential Candidates outlined the called-for measures.

We endorse and support the trade unions’ call, and we call upon national governments, international financial institutions, private sector enterprises (including international brands
and retailers sourcing garments from Sri Lanka) and other stakeholders to support a program of emergency relief, mid and long-term financial support, and a democratic political solution
to the crisis.