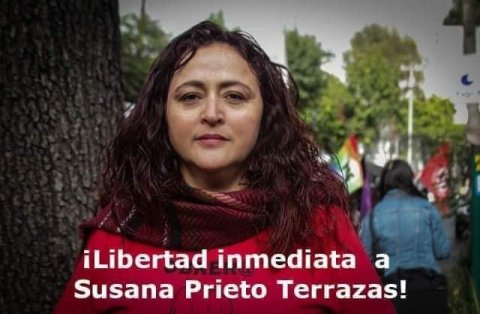 After nearly a month in jail, prominent Mexican labour lawyer and worker rights activist, Susana Prieto Terrazas, was released on July 1, the official start date of the new trade deal between the United States, Canada and Mexico. As a condition of her release, the judge ordered her to pay 66,000 pesos (US$2911) for alleged damages, reside in her home state of Chihuahua and not travel to Tamaulipas state, and refrain from travelling abroad. Susana has appealed those conditions.

Prieto Terrazas was arrested on June 8 in Mexico’s northern border city of Matamoros in Tamaulipas state. She is an outspoken advocate for the rights of maquila workers in Matamoros and other border cities.

The state authorities charged her with inciting riots, coercion, and making threats against members of the Local Conciliation and Arbitration Board. Those charges remain in effect.

Prieto Terrazas was a leading figure in the 20/32 Movement in early 2019 when thousands of workers in maquila assembly plants and other businesses in Matamoros and surrounding communities staged wildcat strikes demanding wage increases equivalent to the percentage increase in the minimum wage. Workers were also demanding a year-end bonus of 32,000 pesos (approximately US$1,600).

The wave of wildcat strikes was sparked by a decision by Mexico's newly elected president, Lopez Obrador, to double the minimum wage for the northern border region, and the failure of local union leaders to demand enforcement of provisions in collective bargaining agreements requiring increases in wages and year-end bonuses equal to any increases in the minimum wage.

The rapid rise of the movement took leaders of company-friendly unions, local and state governments and factory owners by surprise, and led to significant wage increases for workers in the area.

During the COVID pandemic, Prieto Terrazas has also been a leading voice demanding factories in the border region shut down production and give workers full pay during the suspension period.

Her detention has raised serious concerns regarding Mexico’s commitment to respect fundamental worker rights and reform its labour relations system. It occurred just over a year following the adoption of a significant reform to the country’s Federal Labour Law.

Area(s) of Work:
Tracking the Impact of the COVID-19 Pandemic on Mexican Maquila Workers