Nine years since Rana Plaza, IKEA and Levi's are freeriding on efforts to make factories safe 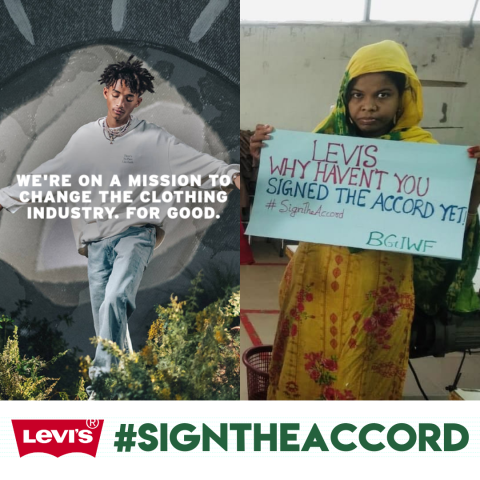 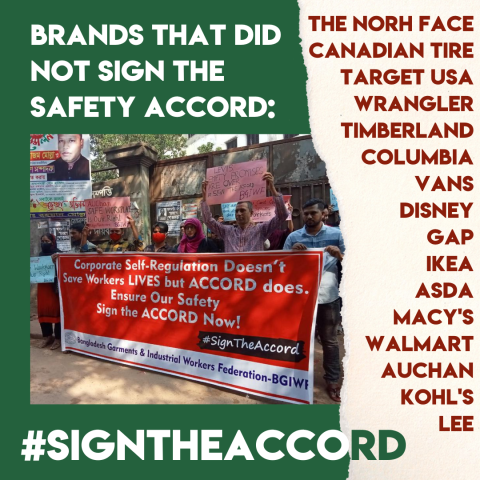 Nine years ago, on April 24, 2013, the Rana Plaza building in Bangladesh collapsed, killing 1,138 people and exposing the incredibly unsafe labour conditions for factory workers in the garment sector. Today our thoughts are with the survivors of this preventable tragedy, as well as the family members of those who died.

The struggle for safe factories continues, as several major garment and textile brands still refuse to put their workers’ safety first. The Clean Clothes Campaign network, of which MSN is a member, marks this day by calling on companies to sign the International Accord for Health and Safety in the Textile and Garment Sector.

Several widely known brands, such as Levi’s and IKEA, have refused to join the safety mechanism that was created in response to the collapse. This programme is now in its third iteration as the International Accord. 171 brands sourcing from Bangladesh have signed this agreement, including fast fashion giants like H&M, Inditex (Zara), and Fast Retailing (UNIQLO).

By refusing to join and pay into the programme, while still sourcing from factories improved by the Accord, Levi’s and IKEA are freeriding on the efforts of other brands. New research into these factories shows how both brands have been profiting from progress made possible by the Accord, while failing to lend their financial and political support by signing on.

In one factory, where IKEA had been present since 2007, an inspection showed that IKEA’s internal monitoring system had completely overlooked many safety violations, including a lack of fire-rated doors, locks on exit doors, and cracks in the walls. IKEA’s 2008 monitoring programme did identify faulty electrical wiring as a health and safety risk to be avoided, yet the Accord website reports that a 2014 inspection found electrical wires without insulation. Many of these issues were resolved in the years after without any contribution by IKEA.

In one factory that Levi’s has been sourcing from since 2011, engineers noted corrosion in columns upholding the multi-storey building and found dangerous electrical systems. All these issues were remediated under the Accord three years later without any contribution from Levi’s.

To ensure that crucial safety work can continue, it is vital that all brands sourcing from Bangladesh sign the Accord as soon as possible. The Clean Clothes Campaign network calls upon IKEA, Levi’s and all other non-signatories, including Gap, Target, VF Corporation (The North Face), and Canadian companies Brüzer Sportsgear LTD, Hudson's Bay Company, and Canadian Tire to sign the Accord. French supermarket chain Auchan and US retailer Walmart should be held particularly accountable, as both brands were buying products from Rana Plaza factories in 2013, yet have not signed the International Accord. These brands source from factories that continue operating with many of the same safety risks that were prevalent in the industry before Rana Plaza.

Md. Kamrul Hassan, General Secretary of Akota Garments Worker Federation (AGWF) said: "Workers need to be sure that they are not risking their lives when they go to work. This is a basic right. The Accord has done important work to ensure factories are made safer, yet brands like Levi's, IKEA and also Gap, Walmart and others are refusing to join. Only a system where unions are part of the solution can bring change to the garment industry. All brands that source from Bangladesh must sign the International Accord now if they care about their workers' safety."

For the Accord’s work to remain successful, it is crucial that the implementation on the ground is done efficiently, with workers’ interests at the forefront. We urge all stakeholders to ensure that the Accord’s work can be carried out as intended so that workers feel and are safe in the workplace.