Pictures from the hoax organized by The Yes Men.

On January 16, The Yes Men, working with Clean Clothes Campaign, staged a high-profile hoax, naming and shaming adidas for its failure to respect workers’ rights.

The stunt began with a surprise announcement from ‘adidas’, detailing their bold new plan to prioritize and protect workers’ rights, and their ground-breaking appointment of a Cambodian former garment worker and union leader, ‘Vay Ya Nak Phoan’ (garment worker’ in Khmer) as adidas’ Co-CEO, alongside Bjorn Gulden, who took charge of the company on January 1.

This quiz on Mexico’s labour justice reform was designed by MSN for use in educational workshops, meetings and conferences by unions and labour rights organizations, as well as by companies and industry associations. 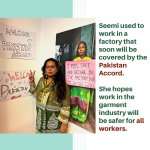 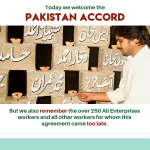 MSN joins with other Witness Signatories to the International Accord for Health and Safety in the Textile and Garment Industry in celebrating the announcement of the expansion of the Accord program to Pakistan.

On November 8, Nicaragua’s Movement of Working and Unemployed Women – Maria Elena Cuadra (MEC) received the 2022 Leslie Nichols International Award. The Award, presented annually by the American Public Health Association (APHA), recognizes individuals and organizations for their outstanding achievements in the field of Occupational Health and Safety (OHS) outside the United States.

A brief launched today by the Clean Clothes Campaign (CCC) documents deadly safety incidents in Pakistan’s garment industry that underline the urgent need for the International Accord for Health and Safety in the Textile and Garment Industry to be implemented in that country.